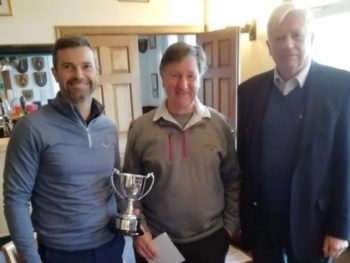 The news is of course dominated by Covid-19 and understandably so. For the moment, we are in lockdown and the authorities hit the ‘pause button’ just when the golf season was about to begin in earnest.

In particular, one of the casualties has been the Halford Hewitt, the 64-school event which has the highest profile in our calendar. This was due to take place at the beginning of April but was cancelled for the first time in peacetime since it started back in 1924. And just when Whitgift had the chance to record its 100th victory in the competition.

But we did complete a couple of events, which are recorded below. Whether there will be more to report in due course remains uncertain.

It was a field of seventeen who travelled down to Deal for the Scratch Cup at the beginning of March – illness, family and business circumstances took a toll on some. This was the third competition of its type. It is essentially a trial for the Halford Hewitt Cup team and for the Cyril Gray team (the over-50s version of the ‘Hewitt’).

The weather was good, certainly by comparison to that in 2019, but there was still a strong westerly wind that challenged the golfers, more especially on the back nine, when it was mostly into their faces. The vast majority found that second half very tricky.

Different weather: same result.  Is there no stopping Neill Williams? Neill went out in 34, two under par, and although, like most of the field, he suffered on the back nine, he bounced back from a double bogey on 16 to record a birdie, birdie finish and a gross 74. This was his third win, so no one else yet has their name on the Cup. Mind you, he needed that finish to his round, because Toby Kemp, looking impressive throughout, shot a 76 to take second place, and the other guaranteed Hewitt places went to Carl Hills, 77, Jack Raison, 78, and Chris Blundell, 80, who edged out Matt Webster and Joe Firth on countback.

Martin Hayes won the Silver Medal for the over-50s, also the same result as last year; Martin was the only one in the field to score better against par on the back nine than on the front, grossing 81. Both Neill and Martin are shown below receiving their trophies from society Captain, Alan Blok, and President, Dudley Thompson, who initially donated the Scratch Cup back in 2018.

We also held our AGM in early March. Bumping elbows was thought at the time to be hugely in vogue but little did we know that even greater social distancing was around the corner. 30 people attended the meeting and the dinner which followed in the Old Library.

Pip Burley is the new society President and Jeremy Stanyard the new vice-captain. Ian Chicken was awarded the Challenge Cup for his victory in this annual knockout competition, and Aidan Millham the Walker Cup, for his achievement in school golf and in particular for winning the Desert Springs European Schools Individual Gross. Both received their trophies at the dinner (see below).