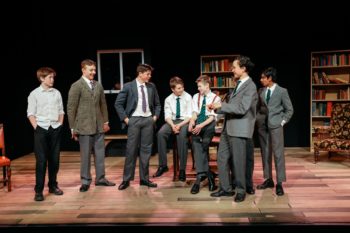 Most of you will know that flamboyant rock star Elton John’s real name is actually Reggie Dwight, but how many of you are aware that he also now goes by the name Kit Connor? That’s right, the twelve-year-old Elton in the recent major film, Rocketman, was played by none other than Whitgift fourth former, Kit Connor. This is yet another impressive role in Kit’s resume, having already appeared in the BBC’s War and Peace and Stephen Spielberg’s Ready Player One.

Despite his busy schedule juggling school work with everything that is entailed in becoming a breakout film star, Kit has still found time to give a great deal to Whitgift drama, and indeed this term he managed a first for the school (as far as I am aware), in directing and putting on the fourth form play, Julian Mitchell’s Another Country, without any staff assistance whatsoever. The play is set in a 1930s boarding school, with the narrative addressing substantial topics including homophobia and political reform, as well as adolescent mental health and suicide; it was impressive to see the cast of 14-15 year olds take on the challenge so confidently.

Director of Drama, Mr Daniel Pirrie, praised the whole company, “The inaugural Fourth Form production was sensational for many reasons: Kit’s superb direction was clear, sharp and pulled focus at just the right moments; the two leads (Jon Cheshire and Henry Gillard) inhabited their characters so truthfully that by the end of the show the audience could not help but feel tremendous sympathy for their respective predicaments; and the other characters were so well-drawn and their relationships so clear that the tension and claustrophobia of the play was quite palpable… I could not be prouder and the future is bright!”

Rocket man burning out his fuse up here alone… 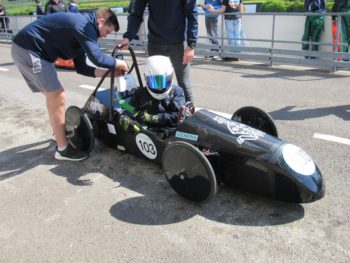 Whilst not quite generating the speed to reach the stars, the Whitgift Racing Team nevertheless created their own version of the Fast and the Furious on May 12th when they travelled to Goodwood to race their Greenpower electric car. Since the start of the academic year, a group of dedicated Sixth Formers and Fifth Form helpers have been working hard to develop the car.

The annual competition challenges students to design and build an electric race car to compete against other schools, colleges and universities. The aim this year was to improve on the 12th place finish at last year’s race. Whitgift started with driver Enzo Moore (First Form) who put in the best lap time of the day, before he changed with second driver Lachlan Seymour (First Form) and Hugo Stremes (Fifth Form) driving the final leg. Whitgift progressed to 3rd place with only 4 laps left, and a strong finish saw them overtake other cars struggling with depleting battery life to take 1st place.

Deputy Head of First Form and project supervisor, Mr Matthew Taylor, summarised, “It was great to see all the boys’ hard work and dedication to improving the car pay off, with many of them giving up significant amounts of their own time. We can now look forward to some of the other races later in the summer and the Greenpower National Final, held at Silverstone in October.”

And I’m gonna be high as a kite by then…

Anyone looking up into the sky from the Whitgift grounds on April 26th might not have seen any high-flying kites, but they certainly would have noticed members of the Wings RAF Parachute Display Team, who jumped into the grounds to round off another high quality, action-packed AGI.

For this year’s inspection, the school welcomed back Old Whitgiftian Brigadier, Jon Swift, OBE, as our Inspecting Officer. Pupils from Whitgift and two partner schools, St. Andrew’s CE School and Thomas More Catholic School, took part in a wide range of activities from climbing to kayaking in the swimming pool, and survival tasks such as building shelters and cooking. They were also involved in military activities such as camouflage, concealment and flying on the flight simulator.

Despite the intermittent rain, spirits remained high and the boys were commended for their very high standards and obvious enthusiasm as he talked to them. In his address to the boys, girls, staff and parents, Brigadier Swift spoke highly of the School and the CCF; he felt it encouraged leadership, resilience and fun, rating it as outstanding. At dinner in the evening, presentations of tankards were made to the senior boys. It was noted over 30 Old Whitgiftians had been involved in helping lay on the day, which was testament to their loyalty to the School and their CCF experiences.

I’m going back to the border…

At the end of March, two Whitgift linguists were invited to Europe House in Westminster to attend a special event for their achievements in the Juvenes Translatores contest. Five students had entered the contest of which two Upper Sixth Formers, Joshua Nurse and Adrien Chatriot, received a special mention. The trip was organised by Modern Languages teacher, Mr Benjamin Morris, who was contacted by a Language Officer for the European Commission. Mr Morris and the pupils were given a special tour of the building and attended a presentation on translation work within the EU by Ciara Colgan, Staff Translator with the European Commission based in Luxembourg. They also enjoyed a translation workshop in which the boys tackled a piece about London Cure Smoked Salmon, a UK protected food name product. Finally, they were given an excellent talk by Dr Charlotte Ryland, Lecturer of German from The Queen’s College in Oxford. She spoke on literary translation and passed on a few translated German books to Joshua and Adrien at the end.

My gift is my song… 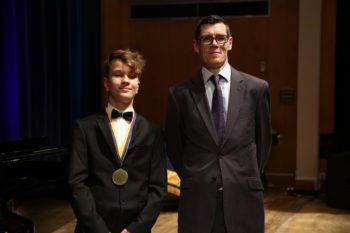 The Whitgift International Music Competition (WIMC) 2019 took place during the Easter holidays, with students from countries including Moldova, Mongolia, Montenegro, Hong Kong and the UK competing. The competition began with an opening recital by Dan-Iulian Druţac OW, the winner of the first WIMC in 2013. The competition rounds took place over three days.

During the semi-final, each competitor performed a programme of three contrasting pieces lasting 20 minutes each, and those who made it through to the final had 10 minutes to play one movement of a concerto. The prizegiving and gala concert featured performances from a selection of this year’s WIMC competitors and a special guest performance by Brian Wong (Third Form), playing the harmonica. The results of the winners in each category are available on the website.

In hockey, the First XI unfortunately lost 1-0 to Reed’s School in the final of the national outdoor championships, meaning they were unable to add to the indoor trophy won earlier in the year.

In cricket, the First and U15 XIs are both still going strong in their national championships. The Firsts have made an impressive start to the season, having already beaten the likes of Wellington College, Trinity and Hampton. The U13s are also going well, having won all their fixtures – both competition and friendly – thus far.

Obviously, the most important event to have occurred at Whitgift over the last couple of months was the wonderful WA dinner held in Big School and presided over by our illustrious President and Newsletter editor, Richard Blundell. This is covered elsewhere in these pages, but it does give me a neat opportunity to segue into my final piece of news, which is to let you know about the charitable exploits of a couple of OW members of staff. 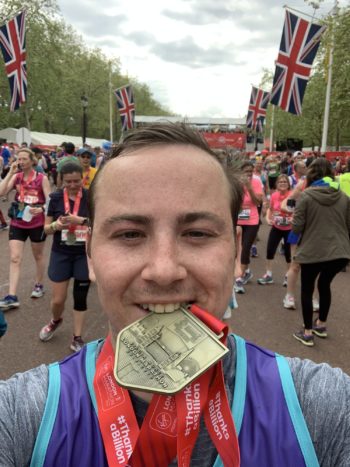 Firstly, Jordan Lewis, who ran the London Marathon. Known as JL to his OWRFC team-mates and Monsieur Lewis, French teacher extraordinaire, to Whitgift pupils, Jordan ran the marathon in a very creditable four hours, five minutes. He was running on behalf of Great Ormond Street Children’s Hospital and thus far has raised £2,381. If you would like to increase this figure, feel free to make a donation at https://www.justgiving.com/fundraising/jlmarathon2019 .

Finally, maths teacher, Daniel Bregman, is stepping considerably out of his comfort zone to take part in a white-collar boxing event to raise money for Pride in London. Daniel has done a huge amount to raise the profile of LGBTQ issues at Whitgift since he returned to teach. He has founded an LGBTQ society and has arranged for the school to have its first ever section in the Pride in London parade which takes place on Saturday 6 July, two days after his foray into the most gentlemanly of sports, boxing! Once again, if you would like to make a donation, please go onto Daniel’s sponsorship page on gldn.gg/f/daniel-gets-punched.