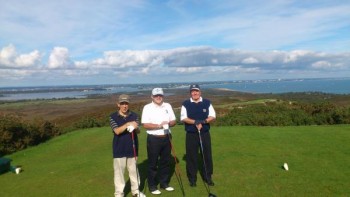 Twenty-four golfers took to Ashdown’s Old and New Courses on Sunday 8th September and none emerged dry! Nothing, however, could dampen the spirits of John Butler, who raced away with the newly presented Autumn Cup. This was Mike Spanswick’s last meeting as President of the OWGS, and he’s done a terrific job.

On a wet and windy Sunday at The Addington in mid-September, the OWGS failed to win back the Barnett Cup; the school demonstrated real strength in depth and ran out overall winners by three matches to one.

With a first round bye, two of our first three matches against Bolton were won, easing us into the day.

Drawn against the hotly tipped Glasgow Academy in round three, Hayes and Mabbutt were quickly under pressure from their opponents and eventually lost 2&1. Gates and Marchbank had more success in the second match, Gates confidently rolling in the putt for a birdie and a 3&2 victory. Williams and Bloxsome continued their unbeaten partnership that began at the Hewitt earlier this year, running out comfortable 4&3 winners, securing 2-1 victory.

Our fourth round match against Wellington was evenly poised from the start. Gates and Marchbank bounced between one up and level through the front nine, before two excellent pars at the 17th eventually secured the OWs a 2&1 victory. Williams and Bloxsome were beaten on the 17th, before attention turned to the deciding match. The OWs were unfortunate to miss the green on the 16th, but, despite a positive chip from Hayes, couldn’t match the par of Wellington. The 17th proved to be our final hole of the competition as another bogey from the OWs sealed our fate.

The close defeat gives us further confidence that both Grafton and Hewitt are within our grasp. With several low handicap golfers due to leave the school in the next couple of years, the team should grow even stronger.

The views of Poole Harbour, from the Isle of Purbeck course, more than made up for the tortuous journey, all the more impressive thanks to the fine weather. O’Luanaigh (33) and Gale (34) both played well, but the winner was Berners-Price (35). Spending a lot of time on the England Amateur Golf Tour, playing nearly a round of golf a day on average, clearly benefitted Mike!

Parkstone was the venue for the second challenge – excellent clubhouse, professional staff, and most important of all, outstanding course. Some very good golf was played by Berners-Price (37), Huxtable (38) and Hollidge (38), but all were surpassed by Tony Harris (39).

The final leg of the tour was at Ferndown, a challenging heathland course. Spanswick, who suffered severe back pain throughout the tour, managed a creditable 31 points. 4 players finished with 33 points, Longhurst (35) coming home in second. The winner was Berners-Price (40), which, deservedly, gave him the overall title.