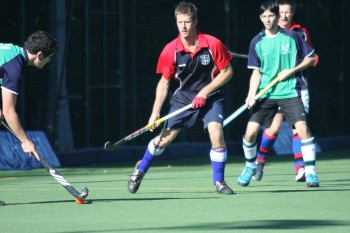 So the hockey season has drawn to a close with all four men’s teams and both ladies’ teams consolidating their positions in their respective leagues.

The men’s first team coming the closest to a play-off game for promotion, but missing out agonisingly by one point to finish third in their league. They had the second best attack in the league scoring 81 goals in 22 games, with the remodelled Ewan Quince finishing top scorer with 27 goals and the fourth tightest defence due in no small part to the cat-like reflexes of Goal keeper Jono Long.

The men’s second team were also in contention for promotion at the beginning of the year, but in the end had to settle for fourth place, despite the astute and sometimes pithy advice from Chris Jenkins (OW 1956-63), who was presented by the second team with a Club Rainjacket at the end of the season for his support and input. Both the third and fourth teams achieved mid table respectability, which for the fourth team was a big improvement having flirted with relegation last season and now go into each game with a renewed air of confidence and commitment.

The ladies’ first team had a good year and whilst finishing seventh, only 4 points separated 4th to 7th place, their cause aided by the predatory skills of Andrea Vicari who finished as top goalscorer, the all round silky skills of Becky Forshaw and the “motherly advice” of Helen Sant. The ladies’ second team had a bit more of a struggle but remained in their division upsetting the form book by beating Wimbledon near the end of the season before then beating Horley, which saw Horley relegated.

The mixed team which continues to play friendly matches and tournaments on Sundays continued to win friends both on and off the pitch with the ability to be more than a match for most opposition, especially off the pitch!

With the exception of the men’s and ladies’ first teams who have umpires appointed by Surrey H.A. all other teams are umpired by other club members, many of whom have been kind enough to pick up a whistle on more than one occasion this season, but special thanks must go to Simon Finn and Lisa Phillips for umpiring many games and at many far flung venues, both of whom you only cross once.

The end of season dinner was reinvented this year to a masquerade ball, thanks to the imagination and endeavours of Paul Henthorne (OW 1993-2001) and Kelly Duncan. With champagne and hors d’oeuvres on arrival, followed by dinner, drinking and dancing until midnight (and then Tiger Tiger apparently!) our Chairman Andy Hooper (OW 1991-98) conducted the awards ceremony. A few of the many notable awards were Alex Steel (OW 1987-94) winning men’s 2nd team player of the year at the tender age of 39 (an old head on old shoulders) and ladies’ first team captain Lena Lawal being the very deserving winner of the coveted Club Person of the year award. A special award was made to 71 year old, 4th team regular Ken George who completed his 50th season of playing for Croydon and then Croydon and Old Whitgiftian hockey club, with most of the members of his mixed hockey team from the sixties there to celebrate with him.

The hockey club continues to go from strength to strength and if you would like to get involved at a playing, umpiring, or administration level, then please contact our Chairman Andy Hooper by e-mail at andyhooper@gmail.com Pre-season is less than three months away!