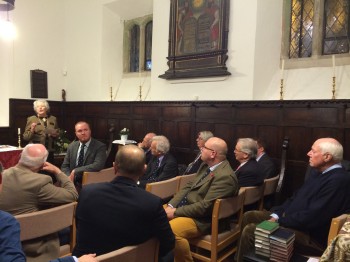 Martin Corney, the Chief Executive of the Whitgift Foundation, hosted a group of OWs for the evening of Wednesday 12th November at the Whitgift Almshouses.

We were greeted in the Audience Chamber, where Archbishop Whitgift had entertained 415 years ago. Our tour guide, Yvonne Walker, highlighted many of the historical artefacts around the room, including an elaborate Armada Chest amongst several ancient pewter plates, the original Deed of Covenant parchment scrolls and a “Treacle Bible”.  Yvonne led us downstairs to the Dining Room, informing us of the dinners our Archbishop hosted for the poor of Croydon, again indicating various monuments to John Whitgift, a plaque rescued from his tomb after the fire in Croydon Minster and the elaborate hand painted windows.

Entering the quadrangle, we could witness for ourselves why Queen Elizabeth I described the Hospital of the Holy Trinity as “An oasis of peace and tranquillity”. Yvonne mentioned how much has changed in 400 years, having recently discovered a knife mysteriously embedded in the lawn one morning. We studied the main tower housing the original one-handed clock and the arched main entrance. Strolling passed the 400th year anniversary globe, we entered the Chapel containing a memorial portrait of John Whitgift and some original benches. Representing Archbishop Whitgift’s original stipend, each resident still receives a small amount of money every Friday morning at 10am in the Chapel entrance.

The party retired back to the Audience Chamber for some nibbles and wine, discussing the wonderful monument we had just experienced.

All had received an insight into our school’s founder and were very grateful to Yvonne and Catherine for their in depth knowledge of the Whitgift Almshouses.