As part of the day, the Carmen liverymen were shown over the impressive array of vehicles including the specialized tractor + trailer used to transport the 70 tonne Challenger 2 tank. They were also treated to demonstrations of the vehicle capabilities across Salisbury Plain from inside the cab.

It was also a special day for Col Nigel Gilbert who was reunited with his vehicle from 55 years ago when he was just a 2nd Lieutenant as Troop Commander of 7 Tank Transport Regiment. Photo taken 15th July 1965. 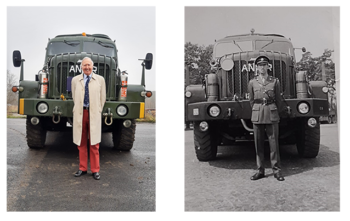