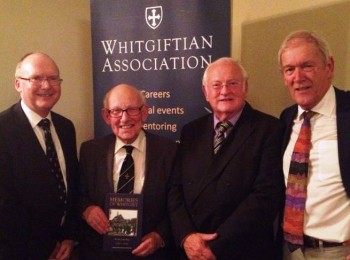 On October 18th, the East Anglia Branch celebrated its 25th annual dinner at Clare College, Cambridge.  Clare is the second oldest college in the University after Peterhouse, where we dined three years ago.  We assembled in the Garden Room and while supping Pimms renewed acquaintance with colleagues we had not seen since last year, or maybe for 50 years.  While welcoming some new faces, we had quite a list of apologies from members who were unable to be with this year.  Nevertheless, 37 members and partners were able to participate in the event including Past Presidents Roy Lewis and Pip Burley, President Stuart Woodrow and Senior Vice President David Strannack.

Having been duly refreshed, we had a 10 minute walk to the Old Court, the centre of historic part of the college, for the dinner.  The walk took us past the fellow’s garden and across the oldest surviving bridge over the river Cam.  The walk did tax the agility of some but eventually we all regathered in the Small Hall, located opposite the Great Hall where a college function was being held simultaneously.

Cannon Brian MacDonald-Milne commenced the formalities with his specially written Grace after which we tucked in to an excellent meal provided by the college catering staff.  After toasting the Queen and when the port had been circulated, our President welcomed members and guests, especially David Raeburn (headmaster 1970-91) who had spent four hours on a coach from Oxford to be with us; much appreciated.  We had a first-hand account of the formal opening of Founders House by HRH the Duke of York which had occurred two days earlier.  Peter Cox then amused us by giving inside information about his recent book Memories of Whitgift and reciting extracts from it.  We heard about the great desk swap and other pranks that many of us recollect.  Peter must have inspired a sufficient number of OWs present because he sold out of the stock he brought with him.

Our Chairman Pip Burley informed us about the ongoing developments of the Whitgiftian Association and the Whitgift Sports Club.  We heard about the academic and sporting achievements of current and former pupils together with the structural developments at the school, which was barely recognisable from the buildings we all remember.  The formalities were brought to an end by our President leading the singing of Carmen.  We did our best but David Raeburn may have wished he was back in Big School!

The celebration terminated in sufficient time for those staying in the nearby Hilton to find the bar still open when they returned.