A very healthy 29 players turned up – healthy as in ‘a good total’ , that is – on a generally fine day, which enhanced the glorious views to be had from the top of the course.

We enjoyed the company of two new members, Bharat Bhagat and Layi Akano, both parents of Whitgift schoolboys, and the course played well, helped a little by the fact that the rough had not yet grown to the heights we experienced last July. Consequently the overall scoring was higher, and the competition at the top proved to be close.

All three of the ‘podium’ places were determined on countback. David Hughes pipped David Mason to third place, both scoring 37 points, and Mike Berners Price (pictured with Tony Harris) edged out Peter Gale, both 38 points, to take the Captain’s Trophy.

Mike’s success completes what might be called a ‘Committee Grand Slam’; all four of the general meetings over the last 12 months have seen a committee member come out as the winner. Let that be a spur to the membership at large! 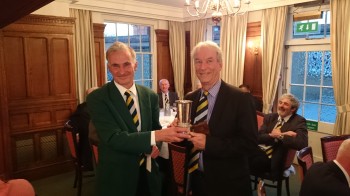