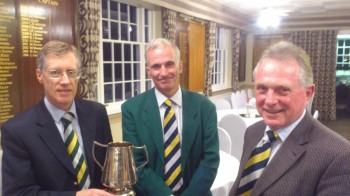 Whitgift have qualified for the finals of the Grafton Morrish. Playing at Royal Wimbledon in mid May, Nic Gates’ team finished in seventh place out of sixteen, the final qualifying position in the London pool, and will be one of 48 schools represented in the knockout stages at Hunstanton and Royal West Norfolk in the autumn. Nic has expressed the view that the Morrish is becoming harder to win than the Halford Hewitt. In that context, it is interesting to note that several prominent Hewitt schools did not make the cut this year, among them Eton, Dulwich, Fettes, Epsom, and Repton. Congratulations to Nic and his team.

Robert Hollidge reports a drawn match 2-2 against the Old Mids at Shirley Park in late May, a result which leaves the trophy in OW hands, since we were previous year winners.

The annual ‘evening meeting’ was held in June. Beautiful weather for golf, and AddingtonPalace in great condition; a perfect combination for 23 entrants chasing the Hornsey-Walker and Veterans’ Cups. In the end, victory went to our host for the evening, Nigel Huxtable who, on his home course, scored 36 points and won the Hornsey-Walker on countback from David Hughes, who nonetheless took the Veterans’ Cup. Captain Mike Berners Price finished third, after a level-par back nine left him on 34 points. Only three participants out of the 23 were not old enough to win the Veterans’ Cup; we might have to reconsider the age limit!!

Last but not least, a first. Whitgift reached the finals of the Royal Wimbledon schools putting competition this year, having not played for the last three years after we were relegated in 2010. Our late call up to the competition this year was answered by the team of Nic Gates, Matt Webster, Chris Blundell, and Nigel Huxtable, who, we believe for the first time, topped their qualifying group of eight schools, including Charterhouse. This led to the unexpected task of turning up for finals day, when the shortened holes did not play to our strengths and we finished seventh out of the eight finalists.