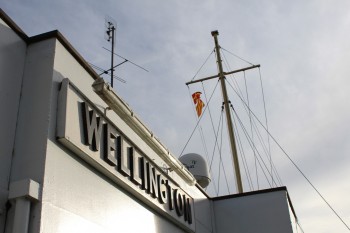 A splendid dinner was enjoyed on board HQS Wellington on Saturday 4th July.

Over 40 OWs, guests and parents of current Whitgiftians began the evening with the tour of the ship (champagne glasses in hand), fantastically conducted by Captain John Freestone, Past Master of the Worshipful Company of Master Mariners. It was fascinating to learn about the history of the HQS Wellington and how it came to be the Livery Hall of the Company.

Dinner was served in the magnificent Court Room, formerly the engine and boiler room of the ship. The catering was second-to-none, served in this most magnificent room, surrounded by a trove of interesting artefacts, including gold plates and framed original documents penned by Samuel Pepys.

Past President, Ian Flanagan OBE from the Worshipful Company of Gardeners delivered the first speech, encouraging us all to draw upon the links between Livery companies and Whitgift to everybody’s advantage.

He was followed by Sheriff Fiona Adler, the first female to be a Freeman and Master of the Worshipful Company of Tobacco Pipe Maker and Tobacco Blenders. She delivered a most interesting account of her duties as Sheriff and a real insight into the workings of the City of London.

All in all, 14 livery companies and guilds were represented, including:-

If you are interested in attending an OW Liverymen event in the future, do please get in touch with the WA Office.

A full gallery of images can be viewed on the WA Facebook page.