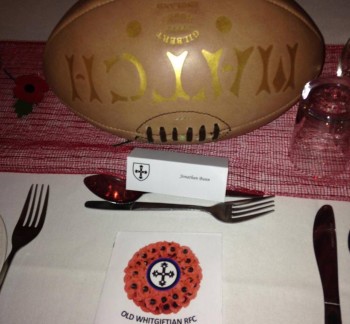 Almost 100 guests attended a lunch at Whitgift Sports Club on 15th November to commemorate the 40 OWRFC players who died in World War One.

A team of 10 OWRFC members paid an emotional, humbling and poignant visit in July to the graves and memorials of 31 former players who lost their lives in Northern France and Belgium. The lunch was the culmination of this year’s memorial activity by the rugby club – which also saw the planting of memorial trees around the Club’s grounds and a dinner and remembrance service at the School.

The lunch, ahead of the 1st XV league encounter against Kingston, was followed by a short talk about the trip by Jonathan Bunn and then the premiere of a film documenting the visit. Lunch guests heard how the group covered more than 750 miles across 25 burial sites in four days and laid poppy wreaths at each grave or memorial. A specially-commissioned Gilbert rugby ball based on the design used in 1914 and featuring the names of the 40 players was also placed at each site.

The trip was organised to coincide with the centenary of the outbreak of the war after it was spotted on the clubhouse Honours Board that Tom Hipsey had just equalled the eight season record of Frank Benton as the longest serving 1st XV Captain. 2nd Lieutenant Benton’s tenure as skipper ended in 1914 and further research revealed that he was killed in action at Delville Wood in 1916. His name is inscribed along with 39 other OWs on the simple wooden memorial board at the clubhouse entrance.

After lunch, with more than 60 players lined up on the pitch as Canon Boswell offered a prayer followed by a minute’s silence and then the Last Post which echoed across the ground. The day was topped off by wins for the 1st XV and Warriors.

The video of the trip can be viewed here: