OWs in Rugby action during the Autumn Internationals 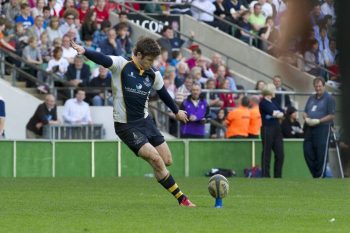 Old Whitgiftians Elliot Daly and Marland Yarde were part of a superb autumn for English Rugby Union, with both hitting highs and suffering lows as England became only the second nation in the professional era to win every match played during a calendar year.

Daly made his full England debut in the first test of the autumn, playing at Outside-Centre against South Africa. He showed plenty of promise and received praise from fans and pundits alike. Playing the full 80 minutes, he scored a terrific long-range penalty and started the move which led to Courtney Lawes’ important try during an impressive first appearance.

Yarde also started, and finished, this match but didn’t have the impact he would have hoped. Despite playing a big part in Jonny Mays’ opening try, he failed to impose himself on the South African defence and was left out of the squad for the next two games.

Those next two games saw Daly show the best and worst of himself. Moving out to the wing against Fiji, he was the star of the show. He scored a brilliant try and was a constant threat, with intelligent running and quality play which the Fijian defence struggled to cope with.

After two brilliant outings, Daly would have been hoping for another impressive game in the third test against Argentina. Unfortunately, it didn’t turn out that way as the Wasps man saw red just five minutes into the game.

A dangerous tackle on Leonardo Senatore led to the referee sending Daly for an early bath. The Argentinian had to go off with a concussion and Daly received a three-week ban from the sport, bringing a negative and premature end to the autumn internationals for him.

Daly being suspended for the important final test match, against Australia, saw Yarde recalled to the starting line-up and he made the most of his opportunity. The Harlequins winger made several attacking runs at the Australian defence, linked up well with teammates and scored a superb try on the way to a 37-21 victory.

The autumn internationals proved to be a bit hit and miss for the Old Whitgiftians involved, but we at the Whitgiftian Association are extremely proud of both players and look forward to seeing them achieve further success in 2017 and beyond.

We would also like to congratulate Danny Cipriani for making his 150th Premiership appearance in November. Cipriani has been on the verge of a return to the international scene and with continued brilliant performances, we could see him join Daly and Yarde in the England squad in the coming year.