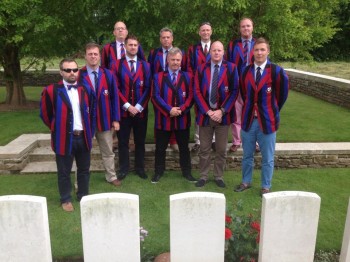 A team of 10 OWRFC members paid an emotional, humbling and poignant visit in July to the graves of 31 former OWRFC players who lost their lives in the First World War in Northern France and Belgium.

Covering more than 750 miles across 25 burial sites in just four days, the group laid poppy wreaths at each grave.  A specially-commissioned Gilbert rugby ball based on the design used in 1914 and featuring the names of the 40 players was also placed at each grave.

The trip was organised to coincide with the centenary of the outbreak of the war after it was spotted on the clubhouse Honours Board that Tom Hipsey had just equalled the eight season record of Frank Benton as the longest serving 1st XV Captain. 2nd Lieutenant Benton’s tenure as skipper ended in 1914 and further research revealed that he was killed in action at Deville Wood in 1916. His name is also inscribed along with 39 other OWs on the simple wooden memorial board at the clubhouse entrance.

The Commonwealth War Graves Commission supplied precise locations for each grave allowing full and effective planning of the trip. However, learning more about each player was a central feature of the visit.

School archivist William Wood provided information about each rugby club member to die during the conflict including details of their school record, military service and death. The school’s records revealed that many of the players were recognised for their bravery in battle with three Military Crosses and one Distinguished Service Order awarded as well as seven soldiers mentioned in Dispatches – each a harrowing, but inspiring tale of Whitgiftian bravery.

Each soldier’s tale was shared with the group at his grave before a minute’s silence which was broken with the words “We will remember them”.

In total, 40 players from the rugby club gave their lives. The other Old Whitgiftian rugby players who lost their lives in the First World War are buried in locations including Egypt, Gallipoli and Jerusalem.

The rugby club’s commemorations began on July 3rd with a memorial service at the school’s War Memorial to remember the 248 Old Whitgiftians who died in World War One. The service was followed by a dinner in the school’s Old Library attended by 50 OWs and guests.

One commemorative ball has been donated to the Rugby Football Union while another will be displayed at the rugby club’s headquarters In Croham Manor Road, South Croydon.

A short video of the trip is being produced and will be shown at a rugby club lunch on 15 November, the match day nearest to Remembrance Sunday. We would welcome all OWs and their guests to join the lunch where the tourists will also talk more about the memorable trip.