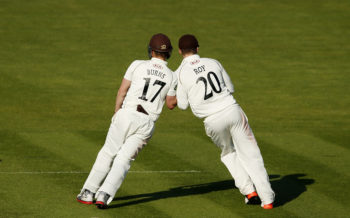 A partnership almost twenty years in the making has been put to the ultimate test this summer, as Old Whitgiftians Rory Burns and Jason Roy stepped out at Edgbaston as the opening batsmen in the first Test of a hotly anticipated Ashes series.

The two Surrey batsmen have opened together at school and for their county, but until the warm-up fixture against Ireland, never before on the international stage. Indeed, while the newly crowned World Cup winner Jason Roy has established his credentials as a dominant white ball player in ODIs and international T20s, this Ashes series marks his first inclusion in an England Test side.

There was a first too for Burns, who knocked his way to his maiden Test century in his very first Ashes innings, producing a heroic stint at the crease to put the pressure back on the baggy greens. Unfortunately for England, opposition captain Steve Smith proved too much to contain. The visitors took the spoils on the fifth and final day at Edgbaston.

1-0 down in the series, the pair opened again in the second Test at Lords. Roy was dismissed early for a three-ball duck by Hazlewood; who went on to dismiss Captain Joe Root shortly afterwards. While wickets fell around him, Burns stayed the course – wearing several pacey short balls into the body – before he was eventually dismissed for 53 with an incredible diving catch from Bancroft at silly point. In England’s second innings, it was the lower order who produced the goods – with Ben Stokes hitting a ton and leading England to declare on the final day, setting Australia 267 to win. The match ended in a draw.