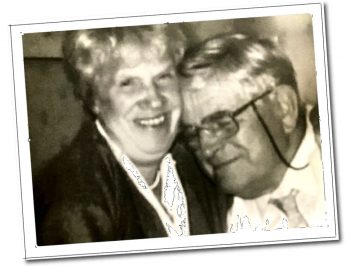 Dick and Anne Glynne-Jones celebrated their 60th Wedding Anniversary on Saturday, August 4th with a reception at Piltdown Golf Club in East Sussex, a stone’s throw from the home where they have lived for the past twenty-six years.

The day was hot and sunny with clear blue skies as more than a hundred guests, including a fair sprinkling of past colleagues and OWs, crowded into a cool, open-ended marquee to enjoy drinks and a buffet lunch.

The couple’s two sons, Jeremy and Tim, provided the entertainment and – clearly inheriting their father’s talent with words – performed a specially composed song in their parents’ honour.  At Dick’s prior request, this was followed by a sing-along of the couple’s favourite songs spanning the past sixty years, led and accompanied by Pip Burley on piano.  The party concluded with an impromptu rendition of “A Penny a Kiss, a Penny a Hug” sung by Dick and Anne, who rightly received a standing ovation from an appreciative and affectionate audience.

Dick taught at Whitgift from 1955 to 1995, where he was Head of English and Head of Careers.  He has been a keen sportsman all his life and for most of his career at the School played for the Domini Cricket Club (comprised of Whitgift teaching staff). He remains a member of Piltdown Golf Club and the Old Whitgiftian Golf Society – although, at the age of eighty-eight, is less often seen strolling fairways and greens.

The OW community, many of whom were taught by Dick during those forty years, will join in congratulating the couple for their long and successful marriage and wish them all the best in the years to come.