Promotion at last for OWRFC! 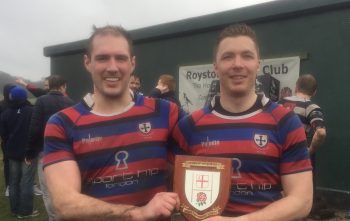 Tom, promotion at last – how proud does that make you as captain and what has been the key to that success this season?

The key to the success this season was the team spirit, both on and off the pitch – and this is what has made me most proud as captain.  Irrespective of the perceived strength of the opposition each week, I always felt that our team had more spirit – quite simply each week we looked and played like the team which was having the most fun. From the pre-match jokes and swapping stories from the week before to the trust in, and hard work for, each other during the tough matches. I knew we were building something special this season.

Another big factor was a much-improved strength in depth across the squad, which time and time again proved vital in turning close games into victories. Games which in previous years would have been lost.

This is my tenth season as captain and the most gratifying part is that, from a leadership perspective, it was the easiest!  This is the teams’ success, the players should be just as proud as I am.

What were the highs and lows of the season for you?

Maintaining an unbeaten home record at Croham Road during the entire season (the first time in 20 years) was certainly a high.  As was training – numbers and quality have been better – gone are the days of mid-winter 3 on 3 games of touch rugby.  Coach John Young ‘JY’ must take a huge amount of credit for this (or maybe it was the free post-training meal… I’m not sure).

Our third league fixture, away against Old Freemen’s stands out to me as the point in the season the team started to realise just what we could really achieve as a squad.  Over the years a long standing and friendly rivalry with Freemen’s had always produced close and hard fought matches.  On this day we won 60 points to 5 and played some outstanding rugby.  It set the benchmark for how we wanted to play for the rest of the season.  Home and away victories against eventual league runners up Old Georgians (who will be joining us in London 3 next season) were also noteworthy.

Every season has its ups and downs but for me the lows (other than personally not scoring a try!) were the injuries, some of which were season ending suffered by some of our players – we wish them a speedy recovery and hope to have them back for the London Leagues.

Which Players have stood out this season and why?

Given enough time I would highlight the contribution of each individual player – everyone played their part this year, it is clichéd but it is the beauty of rugby.  That said, as a captain selecting the team each week there are players who perhaps do not catch the supporters eye or the match write up headlines but I know they form the foundation of the team and they are the first to be selected each week.  Our veteran lock Jim Ryan and inside centre, and the more gifted of the Daly brothers. Miles provide so much and allow others to shine.

Charlie Petschi was the standout 6 in the league and rightly picked up the club’s forward and players’ player award this year.  (To the detriment of his passing game) he would often finish matches with the most carries and meters made showing a turn of pace which often surprised the opposition.  Another player with deceptive pace (and age, he is much younger than he looks!) was our back of the year Jordan Lewis.  He played in every backs position for the team this season and excelled in every one.

What will the team need to do next season to be competitive in London & SW3?

More of the same!  As with the start of each season we will look to ensure Old Whitgiftians finishing their university courses come back to pick up their rugby at the club and of course welcome players that are new to the area.  Otherwise we will not look to make huge changes to what worked so well this year.  Many of the teams currently in London 3 have previously played in Surrey 1. We will look to follow their example and settle into the new environment quickly and look forward to renewing some old rivalries

When does pre-season start?

Tuesday night touch rugby is already under-way.  Formal pre-season training starts on the first Tuesday of July.  All are welcome.