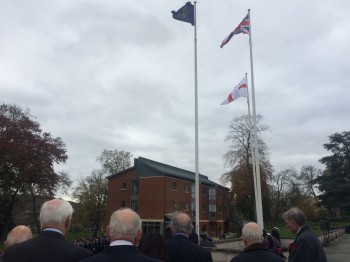 It was a pleasure to see so many Old Whitgiftians join current Whitgiftians on 11th November in remembering all those who have lost their lives serving their country.

WA President, Sir Keith Lindblom, laid a wreath on behalf of the Association, alongside wreaths from the Staff and the School.

The service, which took place by the War Memorial on a suitably grey and dreary day, included beautifully emotive singing by the Junior choirs. Luke Abai Haddon (Whitgift student) read a moving account written during the 2nd World War by a 14 year old Croydon boy scout, who recounted his comrades efforts in moving women and their newborns to safety in Mayday Hospital, and their responsibility as messengers during bombing campaigns.

As always, amidst the sombre thoughts, OWs took the chance to catch up over coffee and biscuits, kindly provided by the School.