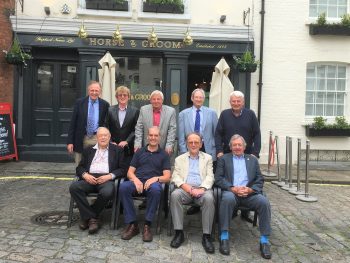 You have in the past heard from Tim Forbes and Robert Kibble about the occasional reunions of former inhabitants of Room 27 (as it used to be and possibly still is), being prefects. The picture here is of those who were there in the summer of 1960, this picture having been taken on the occasion of their 58th anniversary.

The back row, from left to right, shows Robert Kibble, John Higham, Tony Mitchell, Bruce Claxton and Tim Forbes. Sitting in front of them are David Mash, Peter Stevens, Andrew Patience and Roger Lambert. The first two named are now Californian residents, while Tim lives in New Zealand – why they should be standing having travelled so far to join the gathering cannot be explained. Also present, but having left before the photograph was taken, was John Trembath.

We all felt as young as ever, while acknowledging that we might appear to have put on quite a few years since we were together in the Prefects’ Room. Ten of us comprise just over half of those who were there then and are still with us; sadly, earlier this year we lost an old friend from our ranks, John Blackmore (the other permanent absentees from our number are, regrettably, Richard Arscott and Justin Parsons, both of whom died several years ago. We miss them all).

The 58th meeting was arranged because, having enjoyed similarly celebrating our 50th and 55th anniversaries, we felt that it was too long to wait for our 60th.  All these events have been at the same place, the Horse & Groom pub in Groom Passage in Belgravia, where we have always been hospitably and cheerfully welcomed by the landlord, Aiden Ganly.

We believe that our predecessors from 1959, who include 5 of our number, initiated these excellent get-togethers, and plans are already being made for that year to enjoy its 60th next year. Robert Kibble will also be convening those from 1961 to follow suit next year with their 58th. All good business for Aiden! (Incidentally, as a personal recommendation, it is a very good little pub for any occasion).