30 Years on: Class of ’88 Gather at School to Celebrate 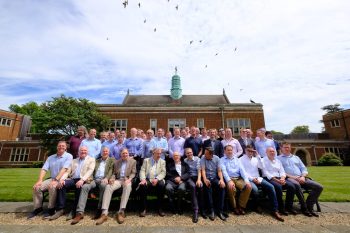 30 Years On: Class of ’88 Gather at School to Celebrate

Blessed with glorious, warm sunshine and blue skies, almost 50 former classmates gathered at Whitgift on 23rd June to mark their 30th anniversary of leaving the School. Attendees came from across the world including San Francisco, Chicago and Hong Kong.

Drinks in the Andrew Quadrangle offered the perfect setting for multiple reacquaintings, and it was not long before schoolday stories were being swapped and memories mined.

With a gentle and welcome breeze blowing through the library’s lead-framed windows, and serenaded inevitably by peacocks, Mr Raeburn rose to give a warm, touching and heartfelt welcome speech which was greeted with great applause from his former pupils. Pastor David Jane said a beautiful, moving Grace, providing an opportunity to also remember those friends no longer with us.

After lunch, Sir Anthony offered a brief vote of thanks that again drew strong applause before a rousing, if a little rusty, rendition of Carmen.

Many then headed on tours of the school and grounds where the multiple changes were noted. The general feeling was that Whitgift was “the same, but different” – still the same strong sense of Whitgift identity and feel, but with so much improvement and development.

In a serendipitous stroke of fortune, the group was able to retire after lunch to the Whitgift Sports Club and enjoy its Beer and Gin Festival long into the evening with the added bonus of seeing three OWs play for England as they beat South Africa in the final rugby test. We were delighted to see Bob Dinnage and Ken Nicholas there as well.

For some, it was their first time back to the School in 30 years, but it was agreed that the year group would seek to reunite in 2023 for its 35th anniversary event.

Many thanks to Donna Lewis at the School for facilitating such an incredible day and also to Headmaster Chris Ramsey for enabling and supporting the reunion.