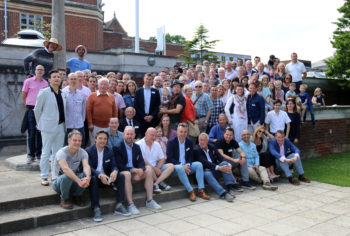 In January 2018, Tim Newey noted in an email to 4 old school friends that the next summer would mark 30 years since they had left Whitgift. The question of whether a reunion should be organised was immediately raised and, as the distribution list grew rapidly over the following months, it was apparent that there was an overwhelmingly positive demand for a party. In fact, email traffic containing stories of wonderful memories of each other – many of which were genuinely laugh out loud tales – grew to such an extent that we had to switch to a dedicated mail system to ensure each newly discovered contact was included in every new thread started.

Finding a date and format which suited all was never going to be easy, but we knew being back at Haling Park was essential and that the event had to be as inclusive as possible. Equally important was that as many former teachers as possible were to be invited as it was clear from the outpouring of reminiscences that so many had been exceptional influences during our school years. So, the format we chose was to meet at the Old Swimming Pool for coffees around midday; into the Quad for 1pm for drinks, food and speeches; a live band whilst even more food arrived from the Chef’s Theatre and then tours provided by prefects. We then transferred to the War Memorial for photos and left Whitgift to continue the party by joining in with Whitfest at the Clubhouse.

Turning to the main event at school, whilst we wanted the reunion to be informal, we were well aware that all present wanted to hear our outstanding line up of speakers. Mark Beard, expressing what so many present felt, said that Whitgift had been a life-altering experience. He praised David Raeburn’s leadership in creating an ethos and culture which inculcated the positive values of mutual respect, tolerance and self-esteem. Mark also noted that he considered it no co-incidence that so many of our year ended up in careers in education, particularly secondary schools, following David’s influence. ‘Doc’ Seldon was as entertaining as ever and spoke of Whitgift having a special place in his heart. When David Raeburn stood, grasped the lectern and cleared his throat, many of us were immediately taken back decades to Big School for an assembly. This time, we received a report that David and his reunited team had conducted on us for our 30 year review. The conclusion that we were all “marvellous boys” gained the greatest cheer of the afternoon!

Our thanks to Chris Ramsey for hosting us; Sarah Harvey’s wonderful catering team and to Zohra Jeraj, Alumni Relations Coordinator, for acting as our point of contact over the months of planning. Your patience and good humour with us has been greatly appreciated! In all, the event welcomed 70 Old Whitgifitians, 20 former members of staff and 50 family members.