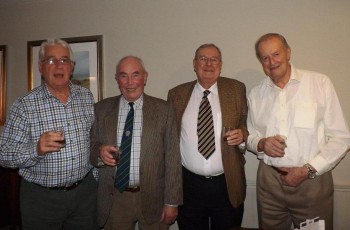 At last, after months of emails around the world, a small bunch of octogenarian OW’s managed to meet up for nostalgic gossip at a couple of West Country locations in December 2014. As the participants came from Cornwall, Devon, Scotland, South Wales and South Africa you might guess the logistical hoops involved in the organisation.

The trigger for this escapade, if you can believe it, was that the wife of my Best Man, John Whybrow, (1944-53) had never had the somewhat dubious pleasure of experiencing a Christmas in the Northern Hemisphere.

However, John and his wife Sue came from South Africa to my home in Cornwall via Westerham and Dublin to stay for five days with me and my wife Iona. It was a great reunion as we had not seen each other since they stayed with us at our home on Exmoor in June 2003 and before that when we stayed with them on our 1997 South Africa tour.

The four of us met for a lunch, on the middle day Wednesday the 17th, with David Dornom (1945-49) and his wife Paddy (from Crediton, Devon) at The Jamaica Inn on Bodmin Moor. A marvelous hostelry (spruced up by new management) it was voted a great day despite the appalling weather which rather dampened the views.

It transpired that John and David had not met since they had, metaphorically speaking, bumped into one another on the high seas around 1954. This was while John was engineering his National Service and David was earning his crusts as a proper matelot.

After doing the local delights, The Lost Gardens of Heligan and the wonders of Mevagissey, especially the book shop (run by Liz Hurley – no not that one) we four crammed our luggage into our Yeti on the Friday and headed for the Crown at Crucis.

This is a Cotswold Country Inn and Hotel near Cirencester which did us proud. Here we were joined by Edward (Ted) Ault (1944-51) and his wife Nancy from Kidwelly, Carmarthenshire and also Malcolm Tilley (1945-51) all the way from Edinburgh. And yes, after the initial shock we did recognise each other!

And so began a weekend of reminiscences and even the production of an ancient photograph by David of three weedy characters on Big Side in their first long trousers in 1947. Malcolm is sure that he had not seen David since they met in Yokahama in 1963 and that he and I had not met since 1953 at my parent’s home in Purley.

By the Sunday we had to say farewell to the Aults back to South Wales and the Whybrows to their relatives in nearby Cirencester. On the Monday we delivered Malcolm to Cheltenham railway station en route to his family Christmas and we returned home to Cornwall.

It was unanimously agreed that we all had a really wonderful time. The only fly in the ointment was the serious colds that swept through everyone, although perhaps the viruses were not sufficiently impeded by the contagious urge to drink out of wet glasses.