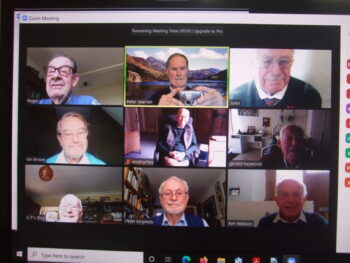 We had been meeting annually since 1959 without a break. So, when it became clear that our intended autumn 2020 meeting could not take place physically it was time for the grit and determination of the elderly (we span 82 to 85 in age) to express itself. Global pandemic, or not, the Upper Fifth would meet somehow for our 62nd time.

Accordingly, I offered to host two back to back Zoom sessions. I did so in some trepidation – with the exception of hosting one or two test runs with the younger generation these would be my first and second ever! Other members were ignorant of that and the offer was taken up with alacrity with existing ‘zoomers’ and with only a little less alacrity by those who would need assistance to reach the starting line in time for the meetings.

In the event and thanks to much forbearance all round, we foregathered. Here we are: (top row from left) Roger Hilton, myself, John Hamilton; (second row) Ian Brown, Nick Hartley Gerald Haywood; (third row) Geoffrey Howard, Peter Kennedy, Kenneth Rokison. With apologies to them and you, my readers, but two present- John Trott and Alan Stocks- had had to leave the meeting before I took a photograph, mea culpa. In short, 11 in all out of the 18 of us still soldiering on.

We began proceedings in our youthful manner – BYOB – with toasts to the Upper Fifth (for its first ever virtual meeting and keeping that unbroken annual meetings record going and to Absent Friends (those living or alas now passed on) and the wine (well certainly mine was far from virtual).

And, thanks to Zoom, for the first time since 2012 we had all three of our overseas residents present, at once, along with a number of colleagues for whom, alas, travel any distance is no longer feasible. A true USP for Zoom in the future.

Given age and the circumstances I believe we can be forgiven if school reminiscences gave way this year to more personal accounts relating to family life – as youth to adult, with or without partners, children and grandchildren. As to the last, one of us (who shall remain nameless) claimed the grand-progeny prize with seven (in truth, as a subsequent visit to the files showed, first -equal.) And who knows that figure may yet be beaten, courtesy of one of our children.

It would have been odd, if not improper at a time of much suffering by others, if conversation had been kept wholly COVID-free. Avoidance by us all, thus far, has been constraining for several, but all would agree another blessing to be enjoyed and grateful for and added to the many from which we have benefited and duly acknowledged over our 68 years.

More general conversation prevailed if under some strain when sharply divergent views were aired on Scottish weather and a hint of antipodean crowing arose when it was reported that the temperature in Brisbane was a pleasant 34C (i.e. 22 degrees above that in Croydon at the time!

We closed with a rendition of Carmen – alas, neither a plus for Zoom nor for collective Upper Fifth endeavour (save for the stalwart effort of our lead singer)!! In our goodbyes reference was made to a then recent event in the USA and the value of the British monarchy from which hint sprung a final toast to The Queen.

We parted in good spirits still as determined as ever to reach that magic 70th Anniversary Reunion.