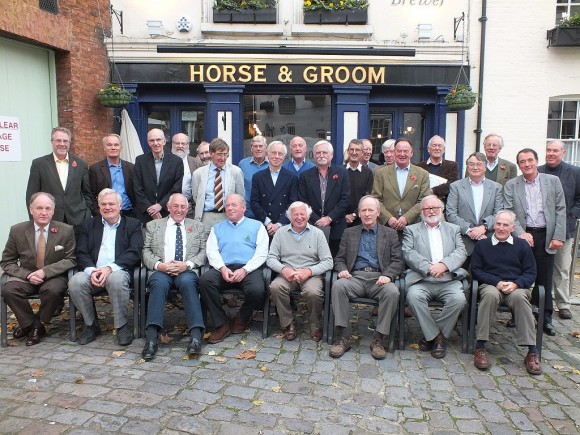 On the 3rd November, twenty-seven out of the thirty-nine incumbents of Room 27 during 1961-62 met for lunch at a small, but select hostelry in Belgravia, to celebrate our 50th anniversary, and although many of us had not seen each other since leaving school, conversations flowed instantly and easily, with pauses only for further refreshment. The decision of nine of us who attended the 1961 reunion to return to the Horse and Groom, despite the larger number to squeeze in to this small but select hostelry in Belgravia, proved to be the right one as we were fed and watered very well. Unfortunately, six were unable to attend, including Robert Kibble our senior professional who hoped to return for the third time but nevertheless still generously donated the prize for the trivia quiz, whilst six others could not be traced. The assembled gathering hailed from Canada (Gordon Brackstone), Spain (Iain Aitken), France (Graham Hill) and from all round the UK, and, perhaps as a consequence of following very diverse careers, had travelled and worked in many parts of the globe.

The academic strength of our predecessors in 1961 continued – but not necessarily as first choice. Tony Stockwell swapped the Inland Revenue for a PhD in Malaysian history, having previously taught in Sarawak with VSO, before becoming a professor in Asian and Imperial History at London University, whilst Richard Elliott after 31 years with ICI , is now a visiting Fellow at Cranfield School of Management. Michael Symes nurtured a specialist interest in garden history, eventually founding an MA course in Garden History in 2000, having written many articles and books on the subject.

A few who had started in finance soon decided other opportunities were more appealing. After two years as a banker, Jerry Hartley became a professional scuba diver and spent two chilly years based on North Sea gas rigs before moving to Cape Town to work in warmer waters looking for diamonds and oil. David Elliott left Barings to pursue his love of the performing arts by joining the English National Opera as Finance Director, before moving to The Royal Albert Hall to oversee the building restoration project in the 1990s.

Time spent in the school cadet force under the eagle eyes of Major Thomas and Commander Hall clearly encouraged some to consider the armed forces – although with varying objectives. Grant Eustace spent eleven years in the Royal Navy – five as a helicopter pilot – before becoming a writer of video scripts and of plays for radio, whereas Mike Wilkinson and Stuart Lord used their time in the RAF and the Navy to qualify as a dentist and doctor respectively. Paul Champness and Brian Councell joined the HAC, with a varying degree of commitment; it may be pure coincidence that both have earned their living subsequently in the drinks industry .

In very different professions, Duncan Murray and Iain Aitken have applied their skills extensively overseas. As an engineer Duncan worked on projects in rural pre Ceausescu Romania, followed by 18 months in Nigeria immediately after the Civil War, and then Hong Kong to stabilise mountain slopes and help construct the Mass Transit Railway. Iain, a medical man, has spent the last fifty years helping developing countries to improve their quality of health services, working in Sierra Leone, Papua New Guinea and Afghanistan to name but a few – with an interval teaching at Harvard thrown into the mix.

Apart from Robin Jenkin, now a man of the cloth, Iain was almost the only one still in full time employment, although those in academia clearly find it more difficult to stop than those who had worked in large commercial organisations. Whilst formally retired, Richard Nelmes continues to work with his research group at Edinburgh University developing new neutron and x-ray techniques for high pressure research – a process he describes as ‘we squeeze things to see what happens and there have been several surprises and a few loud bangs!’. On the other, hand Allan George oversaw the computerisation of a government pension payments system when working for Crown Agents and managed to secure a pension package for himself more than 20 years ago!

As well as catching up with the last fifty years, Peter Cox entertained us by jogging failing memories with reminiscences of our time at Whitgift – many of those present whose exploits were uncovered by Peter’s research were clearly hoping these would not be made public in his forthcoming publication “Memories of Whitgift”. Our group included two OWA presidents – regrettably Pip Burley, OWA President and Chief Barker of The Variety Club in 1999, could not be with us but Mike Wilkinson (2005 President, and the only one of us to have played representative sport at both Lords and Twickenham), stood in and updated us on developments at the school and in the OWA.

The remarkable achievements of the boys at Whitgift now are testament to the outstanding development of the school since 1962, so no doubt future OWs will also look back on their time at the school with the same affection and gratitude as we do for the education and opportunities that were given to us 50 years ago.