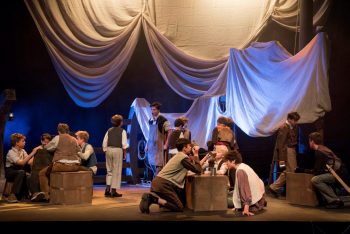 Over the past few years, what with the Eastern European and Japanese scholar programme, the opening of the boarding house and, most recently, the International Music Competition, the school has become an increasingly multi-cultural place; it should, therefore, come as no surprise that when Whitgift ran its own European Referendum on that fateful Thursday back in June, both boys and staff voted overwhelmingly to remain in the EU, with the final winning margin being 73% to 27%. In the run-up to the big day, a series of debates and lectures were put on for the boys and were incredibly well attended. Mr Keith Smith should be congratulated for overseeing the whole thing. Seeing so many young boys genuinely enthused and passionate about politics was most encouraging and bodes well for our country’s future.

The big theatrical production for the Summer Term was the Junior School play and this year, they went nautical. Indeed, Big School was transformed into a pirate’s galleon and the audience was thrust into a rollicking adventure on the high seas, as a huge cast performed Stuart Paterson’s adaptation of Robert Louis Stevenson’s Treasure Island. Current thespian celebrity, Kit Connor (he of BBC’s War and Peace fame), starred as young swashbuckler, Jim Hawkins, who embarks on a high stakes adventure when a treasure map falls into his hands following the death of an old sea captain. Other notable performances came from Sumatera Saragih-Simarmata, as fabled pirate, Long John Silver, Henry Griffiths, as Captain Smollett, Alex Painter, as Squire Trelawney, and Joe Eve, as Doctor Livesly. Director, Mr Hugh Trimble, commented, “I’m immensely proud of our talented and dedicated cast. The boys have given a huge amount of their time and energy to this production, and have ended up with a thrilling show which I really believe shows school drama at its very best.”

Not to be outdone, the music department also finished the year in spectacular fashion, with the extravagantly named, “25 Years of Whitgift Music” concert. A glittering host of old boys – both Eastern European scholars and home grown – reassembled to put together an incredible programme that culminated with the swaggering vocals and silky piano playing of Anthony Strong OW (1996-2001) and his magnificent touring band, who played into the early hours of the morning. For those not familiar, Anthony is an extremely talented jazz pianist and singer, and one of Whitgift’s most successful musical alumni, having released several critically acclaimed albums and toured all over the globe. The evening was effortlessly organised and compered by Director of Music, Mrs Rosanna Whitfield.

One of the things that marks Whitgift out as a school is its diversity and balance. Indeed, whilst the final evenings of the term were notable for their jovial and celebratory tone, as evidenced by all the concerts and productions, balance was provided during the day by things such as the aforementioned political focus and other, more solemn occasions, such as the moving ceremony to commemorate the Battle of the Somme that took place on the morning of Friday July 1st. At 7am, a small number of staff and pupils gathered on the terrace to watch Whitgift’s Corps of Drums playing It’s a Long Way to Tipperary. The Revd Canon Boswell, Vicar of Croydon, and the Headmaster, Dr Barnett, gave short speeches, and British, German and French flags were raised as a mark of respect to all of those that gave their lives during one the bloodiest battles in history. At 7.30am, everyone assembled to observe a one-minute silence in Whitgift’s First World War exhibition, Remembering 1916 – Life on the Western Front. As the bugle sounded to mark the end of the minute, all remained silent and took their seats in the Edwardian-themed room. Dr Barnett gave a talk on the First World War and included the names of the eight Old Whitgiftians who lost their lives on this day, 100 years ago. As part of the remembrance, a photo call captured CCF boys, French, British and visiting German children, from The German School, Richmond, in the carefully-crafted British, French and German trenches that provide a focal part of the exhibition.

When reading through these pages, it is often easy to forget that Whitgift is a school, and ultimately, most schools’ reputations are judged by their academic results. On that note, I am pleased to report that the IB boys did not let us down, with their results breaking many school records. The average points total, of 41 points, is the highest ever at the school, and two thirds of the cohort scored 40 points or more, putting them in the top 5% of candidates worldwide. Six students scored 44 points, a feat only achieved by the top 1%. Almost all the boys have already confirmed their first-choice university places at top Russell Group universities and all our Oxbridge candidates have successfully achieved their offers.

Whitgift has long been known for the peacocks that inhabit the grounds, and more recently, we have added cranes and wallabies into the mix, but you may be surprised to hear that one student has recently been accosted by dragons and lived to tell the tale! 15-year-old, Arminder Dhillon, recently braved the perils of BBC 2’s long-running show, Dragon’s Den, and in doing so, became the youngest person ever to win an investment on the programme, after securing three lots of £20,000 from ‘Dragons’ Touker Suleyman, Deborah Meaden and Peter Jones for his ‘Boot Buddy’, a gadget that can clean muddy boots in minutes. Arminder was only 11 years old when he came up with the idea, after getting fed up with the time he had to spend washing his boots after playing football. Now it is already on sale with retailers including Amazon for £14.99. If they ever sell out, you can always purchase one in the School shop!

In cricket news, the First XI enjoyed another successful season, winning twelve out of sixteen fixtures, but were ultimately thwarted in their quest for national glory, losing out to Cranleigh in the regional final of the HMC T20 competition. The U15 team went one better, however, beating Epsom College in the regional final of their ESCA T20 competition, meaning that they are now through to the Nationals. The U13s also won a limited overs competition, beating Trinity in the final of the Watcyn Evans Trophy.

The guest speaker at this year’s Celebration of Whitgift Life was Lord Graham Tope OW (1953-61), President of the WA 2016. He was an inspired choice, tapping into the political zeitgeist that had been stirred up within the boys by the previous month’s referendum. They were fascinated by the inspirational story of his journey from Whitgift schoolboy to House of Commons to House of Lords, and listening to them talk after the ceremony, I can confidently predict that at least one of them might, ultimately, join him in the revered ranks of Westminster by “doing some good” and “making a difference”, as he so eloquently put it in his address. Other highlights of the event were the crowning of Cross’s as House champions, breaking the Mason’s stranglehold on the competition, and the fond farewell issued by the Headmaster to four Whitgift stalwarts: School Chaplain, Canon Colin Boswell; junior school librarian, Mrs Trish Moody; Mr Discipline himself, Mr David Elvin, and, longest serving of all… chemistry teacher, multiple trophy-winning rugby and cricket coach, and, most importantly of all, ‘Sticky Rock’ front man, Mr David Williams. Put together, their service to Whitgift extends well over a century and they leave a huge hole to fill. But if there is one school that can rise to the challenge…