News From The School

With a pride of peacocks here, a mob of wallabies there, and a stressed teacher carrying wigs and daggers to a last minute Lower Third Shakespeare rehearsal muttering nonsense as he wanders down the Big School corridor, a visitor to Whitgift could be forgiven for thinking that, like Alice in Lewis Carroll’s novel Alice in Wonderland, they too had stepped ‘through the looking glass’ and entered a realm of fantasy where anything is possible. And, indeed, during the last week before half term, the school (the Performing Arts Centre, to be precise) literally did transform itself into Carroll’s magical realm, as the First Form put on their annual play, Alice in Wonderland – Adrian Mitchell’s stage adaptation of the classic novel. The show was quite an undertaking for Whitgift Drama legend, Mr Paul Wilson, as he had to manage a huge cast of over forty boys, but the final result was worth all of his efforts, as it was quite something to behold. Luke Ward was excellent in the main role of James Alice (see what we did there!), and Charlie Porter and Leo Tarby also shone as The White Rabbit and Mad Hatter respectively. All in all, the show was an utter delight, and I can say with great confidence that with the sheer amount of talent that was on stage, Whitgift drama is in very safe hands for the future!

They say all good things come in threes, and that is certainly the case with Whitgift drama. No sooner has one production finished, along come two more on the horizon. Yes, do not fret if you missed the opportunity to see Whitgift’s junior boys strut the boards; the seniors are in action throughout March and what a line up they have in store! If you’re feeling lucky, why not treat yourself to a night of glitz and glamour as Big School transforms itself into a swanky 1920s style gambling den to put on the school musical, Guys and Dolls from March 7 – 10? If you want answers and think you can handle the truth, you could come to the Performing Arts Centre from March 15 – 17 to see the Sixth Form play, A Few Good Men. Bravo!

March is going to be a particularly busy month for fans of all things Whitgift, as not only are there two exciting plays to watch, there is also the prospect of Natwest Cup semi-final weekend to consider. Yes, that’s right… this year Whitgift has not one, but two national rugby semi-finalists, with the U15s joining the U18s by beating St Joseph’s Ipswich by a whopping 69-12 in their away quarter final. Both semi-final matches are due to take place at Allianz Park, home of Saracens RFC. The U18s will be pitted against Warwick School, on Saturday 3 March at 5pm, and the U15s will face Hampton the following day at 3.45pm. It’s been seven years since our last Twickenham jaunt, and several of the faces on show in that magnificent triumph (and the one the year before) have since returned to HQ in the white of England; let’s cross our fingers and hope for more of the same from the class(es) of 2018!

There was an extra buzz of excitement for this year’s House music competition as the guest judge was pop royalty old boy, Jon ‘JB’ Gill, of JLS and X-Factor fame. Upon leaving Whitgift in 2005, Jon took up a theology degree at King’s College, but never got the chance to complete it, after his life took a radical change when he auditioned with three of his friends for the ITV show, The X–Factor. Known as JLS, his band made it all the way to the final of the show, where they finished as runners up. Their subsequent success was quite phenomenal, with the band racking up five number one singles and selling over ten million records worldwide during their career – so Jon knows a thing or two about the contemporary music scene! During the pre-show drinks with the Housemasters, I took the opportunity to remind Jon that he had been in my GCSE English set and enquired as to how useful the two A* grades he had attained under my tutelage had been to him in his subsequent career, whilst also subtly dropping in the fact that I was Mason’s Housemaster. My dastardly tactics did not work, however, as Jon eventually proclaimed Smith’s and Tate’s Houses as joint winners of the competition, which, as ever, was an evening of genuine entertainment.

Had he been at Whitgift a couple of weeks earlier, I am sure Jon would have been pleased to see the school following in Simon Cowell’s footsteps by putting on a talent competition of its own. During the penultimate week of January, the school put on its first singing competition in quite some time with 25 pupils from across the age groups taking part, in front of an enthusiastic audience of staff, parents, boys and the Headmaster. The boys were split into three categories – A, B and C – depending on their age, and sought to impress both audience and adjudicator (Mr James Newby, a professional baritone) with a host of charismatic performances covering a diverse repertoire, ranging from Stephen Sondheim to Sam Smith. The eventual winners were: First Former, Bakari Leon, who sung Labi Siffre’s Something Inside so Strong; Third Former, Joshua Tikare, who sang a self-arranged medley inspired by Daniel Caesar’s Best Part; and lastly Upper Sixth Former, Ashwin Gobiraj for his enthralling version of Giants in the Sky from Sondheim’s Into the Woods. The competition proved to be most popular amongst both boys and staff and will hopefully become a regular fixture in the musical calendar. In other music news, our very own Anthony Strong OW (1996-2001) recently played a wonderful jazz concert to a sold out concert hall audience prior to his current jazz tour.

The elite hockey players at the school nowadays play the sport all year round, but the official hockey term does not, obviously, get going until after Christmas in January. This year the Firsts are looking as strong as ever, currently boasting a record of played 18, won 16, drawn 1, lost 1, with the only blight on their record being an away loss to Durham University first team. Even though it is only half term, there have already been several trophies won: the U16s were crowned National Indoor Champions at Whitgift in January, and they have also (in addition to the U14s) claimed the Outdoor County Championship. There has also been a great deal of personal success, with no fewer than ten boys being involved in the England U16 and U18 sides. Two boys who deserve special mention are: Fifth Former, Matt Blood, who won the adult Premiership Indoor Title with East Grinstead; and Sixth Former, Zach Wallace, who has been invited to join the full Great Britain National side to train at Bisham Abbey!

In other sports news, the senior Fives team enjoyed a great deal of success in the recent SE Regionals, which were played at Whitgift. The U18 Singles Cup was won by Upper Sixth Former, Cameron Low, who only dropped three points in the entire competition – a remarkable feat against some very tough schools. In the doubles, we had an all Whitgift U18 final, with Cameron Low and Sean Kendrick narrowly defeating Danial Ahmed and Philip Lam 11-7. The best news of all, however, was that the new roof held up, despite the horrendous rain! 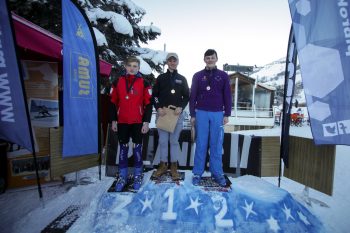 In skiing, Whitgift boys performed outstandingly at the 2017 Independent Schools Ski and Snowboard Championships, held in Les Deux Alpes, France. Now in its twelfth year, the 2017 Independent Schools Ski and Snowboard Championships (ISSSC) has grown in popularity and now welcomes over 350 competitors from an increasingly wide variety of schools. Head of Outdoor Education, Mr Ben Green, remarked, “This was the largest team of ski racers that Whitgift has ever sent to the championships, and, following indoor success in September and a good training evening back in the autumn, expectations were very high before the racing began.” The final list of medal winners is too long to list here, but particular mention should be made of the junior team, who were particularly successful, with Augustin Bozzetto and Freddie Nevrides (both Upper First Form) providing one of the stand-out moments, as they battled it out for gold in the individual slalom event. The junior boys were also a formidable force in the parallel slalom, claiming team gold.

To conclude, I would like to draw attention to a variety of individual successes achieved in recent weeks. The school’s stock in basketball has been growing and growing in recent years, with more and more age groups putting out teams and London titles starting to come our way. Now we have a schoolboy international amongst our ranks with Upper Fifth Former, Joshua Uduje, being selected to play for the England U16 squad. From hoop dreams to the football factory, another Upper Fifth Former, Lucas Defise, has been selected for the Belgian U17 team ahead of the 2018 U17 Euro Championship. This, in addition to old boy, Callum Hudson-Odoi’s, January professional debut for Chelsea FC, shows that the school’s football programme is continuing to bear fruit in the wider game. And now to two more Fifth Formers making a splash on the water polo scene: Toby Roberts has been selected for the Great Britain U17 squad, ahead of the European Championships, in 2019 and Kishen Patel has been selected for National Age Group Squads (NAGS). This is the second year running that Kishen has made national selection. Last year he was part of the National England Water Polo Academy.

Finally, we move away from sports and onto a game – the Imitation Game to be precise! Upper Third Former, Kai Lam, has been awarded the runner-up prize in the University of Southampton’s National Cipher Challenge. The national codebreaking competition has been running since 2002, including both solo and team entries from over 700 UK schools and colleges, this year taking place between October 2017 and January 2018. Competitors were tasked with unravelling encrypted messages centred around the mystery of Rome’s Lost Legion, which vanished in Northern Britain in 108 AD. This challenge proved an enigma to most who took part, but Kai performed exceptionally well and will pick up his prize money of £800 at the annual prize-giving ceremony at Bletchley Park later this year.