At what event might you expect to hear an eclectic programme including the likes of George Gershwin’s Rhapsody in Blue played on a harmonica, an Oasis medley sung by a thirteen-year-old sporting a Liam Gallagher trench coat and shades, and Adele’s Rolling in the Deep being driven along by a tub-thumping tuba bass line? That’s right, the beginning of February saw the annual extravaganza that is the House Music competition roll into Big School to rock the joint.

The winners this year were Dodd’s, who with the aforementioned harmonica virtuoso, Brian Wong, leading the way, were deserving champions. Arguably the stand-out moment of the night, however, fell to Mason’s stalwart, Adedamola Amusa, who sung his own song, Courage, whilst accompanying himself on the guitar. He is a real talent, both as a songwriter and singer, and you may be hearing him on your radios in the not-too-distant future!

No sooner had the last music stand been stacked away, the backstage wizards set about transforming Big School from a rock arena to an Elizabethan stage, because the very next night, the Second Form Shakespeare evening was upon us. 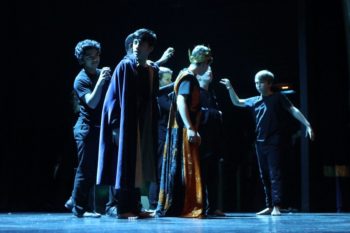 The afternoon dress rehearsals were the usual organised mayhem, with the older boys looking on in jealous awe as class loads of junior boys dressed in soldiers’ uniforms, regal garb and dresses were ferried back and forth from the English corridor to Big School by increasingly manic members of the English department. What I always find the most entertaining spectacle of the day is when the boys all sit down together to eat dinner. Where else would you see King Lear breaking bread with Bottom, or Lady Macbeth sharing a joke with Cleopatra?

The measure of the evening’s success and importance should be measured not by the quality of the performances (getting over 200 thirteen-year-old boys to perform some of the most demanding material in theatre in one venue at one time is quite some challenge, let me tell you!) but by the enjoyment and wide-eyed wonder of those young minds taking part, and given some of the comments I heard from the boys at the end of the night, “Sir, I had no idea Shakespeare could be so fun… Sir, I loved that. When can we do it again?” I would say that it was a triumph. 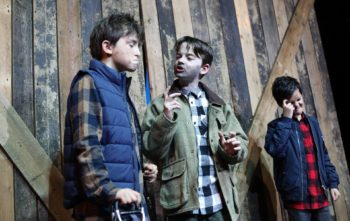 Whilst the Second Form were pitting their wits against the Bard, the Lower First and First Form were taking on Roald Dahl, finishing the half term off in joyous fashion with their two-night run of “Fantastic Mr Fox”. The cast did a great job of making every character distinctive.

The audience watched apple cider-swigging Farmer Bean become increasingly deranged as he led Farmer Bunce (renowned for his goose liver donuts!) and Farmer Boggis (who stinks of chickens) in his plan to stop Mr Fox stealing their ducks, chickens and turkeys once and for all! In doing so he starts destroying the countryside and launches a war against nature.

The set and staging were amazing, like a layered woodland cake that brilliantly placed the animals in their subterranean burrows while at the same time showing the farmers in action above ground. The projected animations, courtesy of the Whitgift Audio Visual Department, tied together the digging and tunnelling with the world above perfectly.

Sixth Former and co-director, Sam Kelly, worked tirelessly with the young cast – some of whom had never appeared on stage before – who loved having an older student to learn from. “These young actors, the youngest in our school, have worked incredibly hard for each other, and Miss Seal and I are incredibly proud of them all,” commented Head of Performing Arts, Mr Pirrie.

In hockey, the school’s strength in depth has reached such a level that we now enter two sixth form teams into national cups, with the Firsts playing in the England Hockey National Competition, and the Seconds in the Independent Schools National Competition. both progressed into the fourth rounds of their respective events. All the other teams entered into national events – the U13s, 15s and 16s – have yet to be knocked out. Even more impressive, the U13s are yet to lose any of the fifteen matches they have played, having scored over one hundred goals! 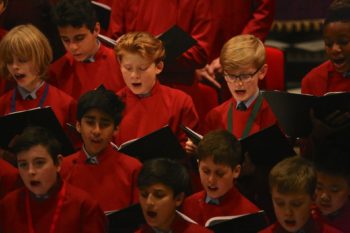 Choral music continues to flourish at Whitgift and 2019 was no exception. Our Choristers have travelled around the country to sing Evensong and at various concerts, and have built up considerable fame beyond Croydon and South London. So much so that BBC Radio 4 followed one of our Minster Choristers, Third Form student Ben Naylor, for a whole term, trying to find out what life is like as a boy chorister. This resulted in the spectacular Christmas episode of Radio 4’s series The Untold which aired on 23 December.

This was topped the very following day by a television broadcast of Midnight Mass at Croydon Minster on BBC One. Twenty-one of our Minster Choristers and Choral Scholars sang live on air with millions watching! They did the School, the Minster, and Croydon proud and put us on the map for choral excellence. Director of Choral Music, Dr Ronny Krippner, said, “I would like to congratulate them all for what was a very special occasion and I know this is something that will stay with them all their life. Well done.” 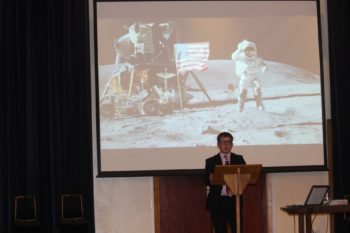 Michaelmas Term saw the widest ever variety of speakers visit the school as part of the Academic Enrichment programme, as well as four excellent seminars on ‘Space’ and ‘Enlightenment’ from pupils and staff. Highlights have included Professor Meric Srokosz’s insightful and data-driven lecture on the impact of climate change on our oceans, ex-Olympian Derek Redmond’s inspirational talk on ‘Dealing with Adversity’, and Professor Richard Harvey’s culturally engaging exploration of artificial intelligence and its future.

Whitgift was fortunate to have also received a visit from Dr David Mitchell, Senior Lecturer in the Faculty of Philosophy at New College of the Humanities, who spoke on the virtues of studying the Humanities. Talks such as these are a key reason for the school’s continued success with regards to Oxbridge applications, with 14 boys having their offers confirmed for these famous academic institutions this year. Students will be studying a wide range of courses including History, Law, Politics Philosophy & Economics, Medicine, Music and Natural Sciences.

Continuing the academic theme, three students with a passion for Computer Science and building their own PCs at home were given the task of putting together the final parts of a new STEM desktop PC to give students access to a second, very high specification machine in the Design, Technology & Engineering department. The computer, a new AMD Ryzen 9 3900X processor paired to a GeForce RTX 2080 Ti graphics card with 32GB RAM and a couple of very fast Solid State drives, will aid the STEM programme. This will increase our ability to model complex computer algorithms, render CAD designs and animations and run analysis in the virtual wind tunnel of the STEM Green Powered car which won several trophies and was a runner up in the International final at Silverstone last year. 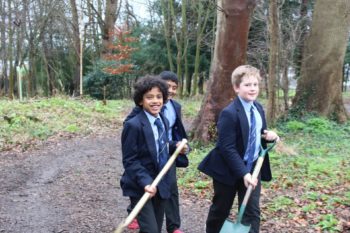 Back in 2017/18, a total of 100 young native trees were planted in the onsite woodland area known to Whitgiftians as the Copse. This year, the plan is to double that number with over 200 saplings added to the site. A group of students have worked tirelessly during their lunch times alongside grounds and garden staff, teachers, support staff and the Headmaster to make the enterprise a success.

The Copse is a really important part of the ecosystem at Whitgift, being home to a number of species of animals and insects, as well as contributing to the clean air on site. Special thanks should go to Daniel Ratling (Head Groundsman) and James Mallett (Head Gardener) who have managed the project, and to those students and members of staff who have braved the muddy ground to get behind the scheme! One Upper Sixth Former, who obviously sees himself as a budding punster, described the scheme as a breath of fresh air and commented how he would be sorry to leave this summer because he would not see it through to its fruition!

And finally, by the time you read this, the national semi-finals for the U18 rugby cup will have taken place and we will know whether or not our first team are making the trip to the hallowed turf of Twickenham for the second year in a row. Hopefully, none of you will have made the trip to Allianz Park to support the boys on Wednesday 4th March, as advertised in the previous newsletter. After sending that to press, I found out that the RFU had announced a late budget cut to their provision for schoolboy rugby, meaning that the national semi-finals were to be played at the home ground of the schools drawn first on a date of their choosing. In our case, that meant a neutral tie becomes a tough away trip to Sherborne on Saturday 7th March.

Whatever fate has in store for the side, one piece of positive news for the school’s rugby is that two of our boys, Olly Hartley and Joe Vajner, have been selected for the England U18 squad, so there will hopefully soon be a few more names to be on the look out for in the professional game.