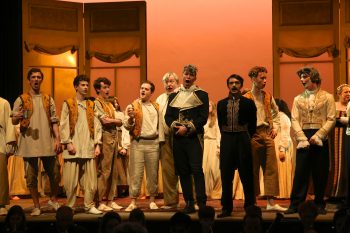 Following on from the success of Hamlet, there were high expectations for the next production – the Tchaikovsky opera, Eugene Onegin. Indeed, the second it was decided that the sumptuous flooring that had been hand-crafted for Hamlet was going to be re-used, it was clear that no stone was going to be left unturned in the quest to put on yet another ‘West End’ experience! The decision was made early on that professionals should play some of the main roles – perfectly understandable when considering the maturity of voice needed to properly sing opera. The end result was a triumph. For the week from Sunday 12th to Saturday 18th March, Big School echoed to the sounds of rousing arias and powerful poetry. The boys and girls (mainly from Old Palace) learnt a great deal from working with professionals and more than held their own in performance. Particular mention should go to Rhys Inward (U6th) and Matthew Munks (U5th), who took on the substantial roles of Monsieur Triquet and Zaretsky, and Maria Kolpaktchi and Charlotte Clapperton, who beguiled the enraptured audiences with their dulcet mezzo-soprano tones as The Nurse and Madame Larina respectively. The orchestra – composed of boys, teaching staff and a sprinkling of professionals – was also first rate, with a resounding highlight being the virtuoso oboe solos of Upper Sixth student, Owen Evans. The Directors, Mrs Rosie Whitfield and Mr Philip Winter, should be congratulated on putting on a truly outstanding show. Bravo to everyone involved!

In past editions of this report, I have sometimes worried that I have gone over-the-top with the hyperbole used to describe the school’s hockey teams, but when they keep on enjoying as successful seasons as this one has been, it is difficult not to make use of the odd superlative here and there! As I write, the 2017 season looks set to be the most successful one yet, with no fewer than three sides – The Firsts, U16A and U14A – all having made it through to their respective national outdoor semi-finals – an incredible achievement! The First XI have also managed to get this far in the season unbeaten, with a record that reads like this: Played 18, Won 18, Goals For 103, Goals Against 25. Bearing in mind the quality of the opposition they have been playing – university sides as well as elite hockey schools – you have to say that it is impressive! Whilst the other age groups have lost a few games, it would be foolish to think that this means they have not enjoyed stellar seasons; on closer inspection of their losses, one realises that the majority of them have come against older age group sides or other Whitgift teams!

Another sports side to enjoy spectacular success has been the U13A rugby. On May 15th, they defeated Winchester House School 30-15 at Maidstone Rugby Club to be crowned National Champions – the first time Whitgift has won this competition. They also went through the season unbeaten, won the Surrey Sevens and swept all before them in the Nationals at Rosslyn Park! The U15A team were, unfortunately, not able to overcome the might of Wellington College (the only side to have beaten them in the regular season) at Allianz Park in their National semi-final, meaning the school’s day out at the Twickenham final had to be put on hold for another year.

On Thursday 2nd March, both the U13 and U15 football sides made the trip to Pirelli Stadium, home to Championship side, Burton Albion FC, to play in their respective ISFA National finals. The U13 side was joined by their entire year group, who were bussed up the motorway to support their peers. Unfortunately, they were defeated by Moorlands School in a final decided by a single goal scored in extra time. It was a shame that the travelling supporters could not stay late enough to watch the U15 final; if they had, they would have witnessed a magnificent Whitgift victory, with the side pulling out all the stops to defeat Forest School 3-1.

In other sports news, the U19 table tennis team of James Smith, George Hazell, Reiss Vydelingum and Jason Kwok won the ESTTA U19 Table Tennis National Championship at end March, defeating Harefield Academy 5 – 3 in the final.  With all the boys in Years 11 or 12, they have at least one more year together as their current powerhouse U19 team. In the fledgling sport of basketball, the school has enjoyed its most successful year to date, with the U15s winning the London Schools’ Cup and the U16s being crowned champions of the league. Lastly, I am pleased to report that Upper Third pupil, Harley Norman, built on his success in the London Junior Marathon last year by claiming 4th place in the U15 boys English Schools’ Cross Country Championships. Harley has since been selected to run for the England U15 team. Another Olympian in the making?

After the successes of the 2013 and 2015 Whitgift International Music Competitions, resulting in talented boys winning a range of prizes, including a fully-funded boarding education, the competition has established an international reputation for excellence, and this year’s version certainly lived up to expectations. The opening concert on Sunday 2nd April saw former winner, Dan-Iulian Druţac, return to where it all began in Big School to perform a dazzling programme with the Whitgift Symphony Orchestra. The opening rounds subsequently took place in the Concert Hall with the event’s conclusion back in Big School on Thursday 6th April, with the Winners Gala Concert in which the three victors – Krystof Kohout (Czech Republic), Marian Bozidharov (Bulgaria) and Chiu Chun John Lui (Hong Kong) – got to showcase their talents accompanied by full orchestra. The special guest star of the night was Anita Chen, an international ‘double-threat’ soloist, who demonstrated her unique abilities by performing concertos on both piano and violin!

To conclude, I would like to put in a plug for the Whitgift Charity Committee! The annual Christmas Charity Concert has become a hotly anticipated Whitgift tradition and this year, in addition to all the money it raised for the Mary’s Meals, CALM and Royal Marsden Hospital charities, we were also able to provide Christmas cheer for some of the local homeless population. Duke of Edinburgh Bronze boys supported the Evolve Housing campaign to provide every homeless resident using its services with a Christmas gift bag filled with toiletries and treats. We were the single biggest contributor, with over 100 lovely gift bags collated and donated. The boys visited the Evolve HQ to deliver the bags. On Friday 24th March, Whitgift hosted its annual Charity Comedy Night. Parents, staff and pupils enjoyed an evening of entertainment, with the added thrill of uncertainty about who was going to be the next focus of the comedians’ jokes. Host Tim Clark, a regular at Jongleurs and the Comedy Store, was gracious and hilarious in equal doses as the compere for the evening. In total, £1,488 was raised for the school charities. Miss Lucy Laycock, acting Charity Co-ordinator, should be congratulated on the work she has put in over the past few months. She is keen to collaborate with Old Whitgiftians, Parents and Staff to organise new events and would welcome any ideas. Please feel free to contact her on lel@whitgift.co.uk.