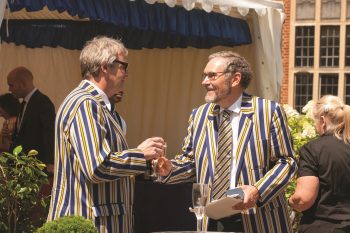 The Whitgift School’s CoWL attended by HRH The Duke of York.
Photography by Danny Fitzpatrick / DFphotography.co.uk

“Infinite Passion, and the pain

Of finite hearts that yearn.”

When you are a retiring Headmaster, you end up giving a lot of speeches; the overriding theme of Dr Barnett’s was undeniably his unquenchable passion for everything that is Whitgift. When addressing the old boys at our annual dinner last May at The Royal College of Surgeons, he defied expectations by speaking not about the school’s many successes, but with regret about all the things he had not managed to achieve during his 26-year tenure as the leader of our beloved school, and it was in this speech that I believe we saw the true scope of his vision and love for Whitgift. From running tracks on top of sports halls to biodomes full of exotic flora and fauna, Dr Barnett wanted Whitgift boys to experience it, and whilst no-one could argue that what he did manage to achieve during his time in charge was not incredible, he still wanted more – a dichotomy expressed so eloquently in the words above, taken from the Robert Browning poem, Two in the Campagna, in which the poet laments mankind’s flaws and limitations, whilst at the same time lauding our boundless energy and enterprise.

At the end of the dinner, current WA president, Dr Richard Bateman OW (1967-74), declared that Dr Barnett was to be made an honorary old boy, and I know for a fact that the Headmaster was genuinely touched by this gesture; indeed, at the dramatic culmination of his final ever official speech at the Celebration of Whitgift Life on the last day of school, he shed his academic gown to reveal to all present… a shiny, new WA Blazer, with the declaration, “I’m no longer Headmaster, I’m an Old Whitgiftian!” Traditionally, these would have been the last words of the school year, but a very special guest was still to speak. The school’s patron, HRH The Duke of York, completed proceedings by paying tribute to Christopher (he’s an Old Whit now, so I can drop the formalities!) and everything he has done for Whitgift. He commented on how the school’s success was chiefly down to Christopher’s unyielding belief in the boys and staff, aligned to the fact that he was prepared to say yes to so many ambitious proposals when many others would have said no. The final act of the ceremony saw HRH unveiling a plaque which stated that the Sports and Conference Centre was from that moment on to be named, The Barnett Centre – a fitting legacy for a man who sought to overcome the finite details of running a school with his infinite passion.

Other highlights of the ceremony were Mason’s being crowned House Champions for the fourth time in five years (“Give the Housemaster a raise!” I hear you clamour!), the performance of Czardas by Marian Bozhidarov, our most recent winner of the International Music Competition, and the extract performed from The Lion, the Witch and the Wardrobe, the Junior School production that had been performed earlier on in the term. Indeed, it was ironic that during some of the hottest June weather Britain has seen in the past 40 years, Big School was transformed into the land of Narnia, where it is always winter! The enchanting tale of the Pevensey children (played by Edward Volley, Scarlett Peachey, Leo Castledine and Suciyanna Saragih) finding an entrance to the magical land of Narnia at the back of a wardrobe, was a great choice to showcase the talents of one of the largest Lower School casts Whitgift has seen. Director, Mrs Miranda Merrett, praised all those involved, “I am enormously proud of the cast for everything they did to make the show so special. They perfectly captured the magic of Narnia and even managed to convince the audience that it was ‘always winter’ in the hottest week of the year!”

Whilst the actors found the going tough, having to perform in fur coats and animal costumes in such sweltering temperatures, the cricketers found the ever-present sun a welcome relief in light of the monsoon-like seasons we have experienced in recent years. Indeed, the completion rate of fixtures was the best it has been in many a year. The two most successful sides this year were the U15As, who won 14 out of 16 fixtures and were crowned regional champions of the national ESCA T20 competition, and the U12As, who remained unbeaten all season and reached the final of the Jubilee Trophy (result, as yet, unknown). The U15’s 8 wicket victory over Norwich School in the ESCA competition means that they are now the South East’s representatives on Finals day at Arundel Castle on Sunday 3rd September.

In rugby, the 1st and 2nd XVs embarked on a demanding, but ultimately highly successful tour of South Africa. Both teams played five fixtures against some of the traditional powerhouses of South African schoolboy rugby, including one each against Paarl High School, arguably the strongest school side in the country this year. Therefore, the fact that both sides won three, drew one and lost one, is a really encouraging set of results which bodes well for the season ahead, which begins for the 1st XV with their defence of the President’s Cup on Friday 1st September.

In music news, Whitgift has partnered with the English Cornett & Sackbut Ensemble (ECSE) to record a new album of Tudor music. Director of Choral Music, Mr Ronny Krippner, directed the Croydon Minster Choir of Whitgift School and the ECSE, with whom the School enjoys a long and successful music partnership, through a repertoire including rare recordings of Tudor instrumental items by Coperario, Bassano and Ferrabosco, as well as choral greats from Tallis, Batten, Morley and Phillips. This new CD celebrates Archbishop John Whitgift, the School’s Founder, who believed music to represent an integral part of divine worship and who played an influential role in securing the survival of the English choral tradition during the late sixteenth century. The CD is called The Tudor Choir Book and is available for purchase on Amazon.

In May, Lower First Form pupil, Femi Owolade-Coombes, attended a very special event at St James’s Palace. The Duke of Cambridge and Prince Harry were presenting the Diana Award’s inaugural Legacy Award, in memory of their mother, the Princess of Wales, to mark the upcoming 20th anniversary of her death. Femi, a Design Technology & Engineering Scholar, received a Legacy Award for his work setting up a local ‘Raspberry Jam’ (a coding workshop where aficionados of all levels can share knowledge and meet like-minded people). His is a Raspberry Jam with a difference, however; aimed at 5-15 year olds, his South London Raspberry Jam, set up with the help of his mother, is Autism and Tourette’s friendly. 11-year-old Femi explains, “I found that I really liked coding events, and felt that the kids I know who are like me might also like them. We have partnered up with Tourettes Action and Ambitious About Autism to help spread the word about how much fun coding can be.” This was not the first time Femi had gained public recognition for his technical prowess: in 2016, he was a finalist for the ‘BT Young Pioneers Award’ at the Tech4Good Awards. Reflecting on the experience, he describes feeling honoured to have been shortlisted, and inspired by meeting people across the country who are doing fantastic work with technology; last year, the winners of his category created an app to help service Water Aid pumps around the world, in order to prevent them going into disrepair. Although he did not win, this did not detract from how proud Femi, his family and Whitgift were that he was shortlisted amongst such an innovative and impressive group. A year later, Femi was asked by Mark Walker, the co-ordinator, to speak at the networking and introductory event for all the Tech4Good finalists of 2017. On Tuesday 13 June, in the London BT Tower, he gave a presentation to the finalists about how inspiring the awards were last year; how they had motivated him to utilise networking opportunities and social media, and to be ambitious with his next projects. You can read about all of Femi’s events, projects and thoughts on his blog, which can be found on the school website.

As is traditional in an end of year school report, I will finish with the academic highlights. Firstly, a big congratulations should go to the IB cohort of 2017, who achieved fantastic examination results. The students performed exceptionally well, achieving an average score of 39.4 points. A special well done to Luke Hatteland-Dunn, who scored the maximum total of 45 points (last year, only 146 candidates in the world managed this incredible feat, so it is a huge accomplishment)! Five of the 30 IB students have been accepted onto courses at Oxbridge universities – we wish them all the very best in their future studies.

Lastly, I would like to give a big pat on the back to all my fellow colleagues on the staff after the school was awarded the highest possible rating in the recent ISI inspection. It is a testament to the hard work of all the staff and pupils at Whitgift that the key findings of the report acknowledge not only that pupils’ achievement is outstanding across a wide range of activities, but also that the relationships of pupils with each other and staff display a high degree of respect and tolerance, also reflecting an appreciation of diversity. Dr Barnett leaves behind a school in rude health; both boys and staff are primed for the pastures new that await us with our new Headmaster, Mr Ramsey, who I am sure will continue to cement our reputation as an outstanding school.