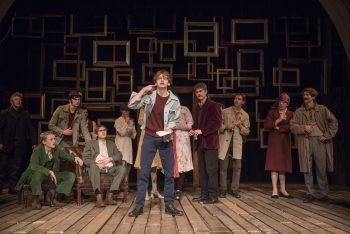 When the inspection team left the premises last year, leaving behind the documents that officially testified what we all already knew to be the case – the fact that Whitgift is an outstanding school – little did we know that one of them would find his way back! Indeed, rumours abounded when it was announced that The Government Inspector himself was to be paying us a visit during the penultimate week of term. What could this mean? What should we do? Could we get Elliot Daly to lend a hand? Luckily, all fears were quashed when Director of Drama, Mr Daniel Pirrie, explained that the aforementioned inspector was just the name of the next school play he was putting on, following on from the huge success of Hamlet last year. The play, by Russian playwright, Nikolai Gogol, was originally performed in 1836 and satirizes the extensive political corruption of Imperial Russia. I watched it on the second night and I must say, it was absolutely hilarious. Upper Sixth pupil, Oscar Nicholson, fresh from playing Hamlet last year, shone in the main role of the Town Governor. Oscar has been a real stalwart of Whitgift drama during his time at the school. With a potential place at Cambridge to read English in the offing (he was having his interview only hours before the first performance!) we may have a future footlights star as an OW! As good as Oscar was, the real star of the show was Lower Sixth Former, Ben Goldby. He played Ivan Khlestakov, the minor government official whose mistaken identity triggers the farcical events that dominate the action of the play. Ben gave an incredibly mature, assured performance (picture a young Rick Mayall playing Lord Flashheart in Blackadder, and you get somewhere close) and surely is another name to look out for in the future.

Obviously, the school has been putting on plays such as this since the dawn of its existence, but a literary tradition that only started a couple of years ago that is gaining quite a following is Whitfest, the school’s very own answer to the Hay Literary Festival. A host of children’s authors are invited to give talks and workshops to the first form boys and this year’s festival had something for everyone: Steve Cole’s stand-up comedy, Ciaran Murtagh’s tips on Mr Bean cinematography, Kieran Ekeledo’s practical advice on both book creation and money management, Nikki Sheehan’s creative stimulus for poetry, Stephen Davies’s infusion of history into fiction, Jamie Thomson’s ruthless voice coaching on how to speak like a Dark Lord, and last but not least, Karl Nova’s Spoken Word Workshop and enthusiastic Grand Finale Concert! Many of the authors’ books can be seen around the School and the boys are still abuzz with inspiration from the day.

Not to be outdone by English and Drama, the Music department has also been hard at work over the last couple of months. On October 19th, Whitgift musicians were out in full force to showcase their talents in the School’s highly-anticipated Autumn Collection Concert. No fewer than eight different ensembles took to the stage to perform pieces both classical and modern, and highlights of the night included the masses of the First Form Choir singing their upbeat and moving renditions of Pharrell Williams’ Happy and the Lion King classic, The Circle of Life, and The Corps of Drums performing a number of pieces, including their ever-popular glow-in-the-dark number. Two weeks later, a group of Whitgift musicians were privileged to perform a concert at the Embassy of Bulgaria ahead of the upcoming Bulgarian Presidency of the European Union. Whitgift were specially invited to take part in this event, hosted for the diplomatic corps with guests including Attachés from a number of EU and Eastern European embassies in London. The programme featured six solo pieces by renowned European composers, including Karadimchev and Vladigerov of Bulgaria, fittingly played by Bulgarians Marian Bozhidarov, Whitgift International Music Competition (WIMC) 2017 winner, on the clarinet, and violinist Hristo Dunev, former Whitgift pupil and winner of the inaugural WIMC 2013.

The Corps of Drums also played a central role in the Remembrance service on Friday 10th November. Drum Major, Philip Pestell led his players with calm authority to provide stirring support to the traditional service. The Third Form boys were joined by almost forty Old Whitgiftians to pay tribute to fallen servicemen by the War Memorial. The Last Post was played by bugler, Josh Nurse and the flag party included NCOs from the school’s own CCF.

The term has been a phenomenally successful one for the school’s rugby teams. Both the Firsts and the U15A teams are still going strong in the National Natwest Cups, with the former through to the semi-final – an enticing prospect against current champions, Warwick, at Allianz Park on March 3rd – and the latter in the quarter finals against Hurstpierpoint College on January 17th. The U15s defeated old enemies, Trinity, 19-10 in a ferocious match to clinch their regional qualifier and are one of five sides to go through the term unbeaten – the others being the U12Bs, U14As, U16Bs and, last but not least, the mighty U16Cs, coached by yours truly! The Firsts, whilst suffering a couple of losses, have still had a remarkable season, including a record 46-8 victory over Millfield.

In golf, Harry Plowman Ollington and Alfie Fox have continued the school’s recent success by winning the HMC Schools Singles Championships, early in October. In an exceptionally strong field of 40 boys, competing from all over the country, Whitgift won both the team and individual events. Harry shot an impressive 2 under par score of 70 on the Red Course at the Berkshire Golf Club, bringing Whitgift’s individual event-winning tally to three years in a row. Alfie finished in 3rd place (on countback) in the individual, shooting a 1 under par score of 71. With the best golfing schools in the country taking part, Whitgift won by an impressive 5 shots in the team event. This performance caps off a successful few months for the Sixth Formers, who have recently accepted golfing scholarships to top American universities and have won the South East area league with the Surrey Men’s 1st team. Maybe two Halford Hewitt stars of the future?

There was more success for the Whitgift Pentathletes in November, with the academy achieving three national titles and four medal finishes in the British Biathlon Championships, held in Solihull over the last weekend of the month. This, following on from the fact that four members of the academy were selected to represent Great Britain in the Laser Run World Championships in Cape Town, South Africa, highlights the huge strides the school is making in the sport. Maybe Joe Choong will face his fiercest competition in future Olympics from a current Whitgiftian? The Whitgift table tennis team also recently received national recognition, when the U19 side, comprising of George Hazell, James Smith, Jason Kwok and Reiss Vydelingum, were chosen, against fierce competition, as the England boys’ school team for the 2018 International School Sport Federation (ISF) World Schools’ Table Tennis Championships, which will take place from 8-14 April, in Malta.

Finally, the term came to an end with the customary Charity Day, comprised of a series of activities that boys could pay to participate in during the day, and the infamous rock ‘n roll (or should that be rap and garage?) extravaganza that is the Charity Concert in the evening. As ever, the boys enjoyed themselves immensely and raised a huge sum of money (just over £2,000 at the most recent count!) for the school’s chosen charities this year: Magic Bus and Bees for Development. Also, as last year, the Duke of Edinburgh Bronze boys ran a campaign to collect gifts for the homeless – for the local charity Evolve. The boys collected a huge number of gifts from the different form groups to put into bags that will be opened by residents in the charity’s hostel on Christmas day. It’s good to know that despite their busy schedules, the boys can still find time to help those less fortunate than themselves. From Whitgift, that is it for 2017. Wishing a Happy New Year to all!