“Life’s but a walking shadow, a poor player,
That struts and frets his hour upon the stage,
And then is heard no more. It is a tale
Told by an idiot, full of sound and fury,
Signifying nothing.”

There is more to Macbeth than witches, blood and ambition. As evidenced in the quotation above, it deals with complex existential themes and, as such, is quite an undertaking for a young school cast. Nevertheless, that is exactly what Whitgift did this term for the senior school play.

With a golden generation of actors having departed with the graduation of last year’s Upper Sixth, and a somewhat disappointing uptake from the current Sixth Form at the audition stage, the cast list that was placed up on the drama notice board at the beginning of term had a decidedly raw look to it. Indeed, many eyes were raised when it was revealed that Fourth Former, Jack Godwin, was to play the eponymous role. Yes, he was outstandingly menacing as Roger in the superb junior production of The Lord of The Flies last summer, but he is only fourteen years old! As it turned out, we had nothing to worry about; with a maturity beyond his years, Jack commanded the stage with great authority as the tragic thane, enthralling the audience with his portrayal of a man driven to the pit of despair by ambition. Other notable performances came from Joe Barber, as Banquo, and James Desmier, as MacDuff.

What was most impressive, was the overall performance of the entire cast. Expertly directed by professional Globe actor, Keith Bartlett (who, incidentally, played Polonius in the school’s production of Hamlet two years ago), the ensemble made excellent use of the traverse staging and no-expense spared props – a six foot model of the Queen of witchcraft, Hecate, and a fully turfed Big School floor – to totally immerse the audience into the dark and bloody world of 11th century Scotland.

“Confusion now hath made his masterpiece.” 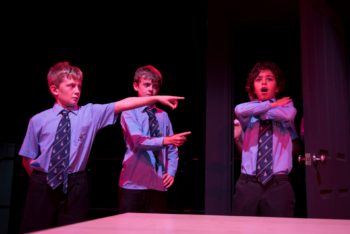 Earlier on in the term, Andrew’s House claimed the spoils in House Drama with their ingeniously titled self-written play, ‘The Play’. It focussed on two budding playwrights (Jack ‘Macbeth’ Godwin and fellow Fourth Former, Will Allnutt) trying to come up with an idea for a script for a drama competition – how metatheatrical! Whilst they discussed their ideas, the rest of their cast mimed around them wearing an assortment of increasingly surreal costumes to bring their fantasies to life.

This ostensibly simple conceit actually worked incredibly well dramatically and allowed the audience to view some of the acting elite from the Upper Sixth Form in a wholly new light: Charlie Barber skipping around the stage in a full length Edwardian dress with nails painted and lips rouged, and, better still, School Captain, Ben Goldby, gyrating hypnotically, covered from head to toe in green spandex in his role, dancing alien.

“When shall we three meet again, in thunder, lightning, or in rain?”

Whilst Autumn this year brought more than its fair share of stormy weather, this did not put a dampener on the music department’s efforts to brighten things up. Indeed, their annual Autumn Collection concert was a joy to behold, with the sunny disposition of the First Form and their renditions of Stevie Wonder’s Isn’t She Lovely and Bruno Mars’ Uptown Funk lighting up Big School. This, combined with the brass ensemble’s performances of Gonna Fly Now from Rocky and the Thunderbirds theme tune, really set pulses racing, making for an exhilarating evening which certainly put paid to any early winter blues.

In addition to the Autumn Collection concert, the School presented Lior Navok’s musical re-imagining of the well-known tale Pinocchio. The concert was a culmination of musical collaboration between the London Myriad Ensemble (LME), an international prize-winning wind group, and the Lower First boys of Whitgift. The morning workshop began with instrumental introductions and was followed by group sessions during which the boys learned how to use percussion instruments to create incidental music for the evening performance. 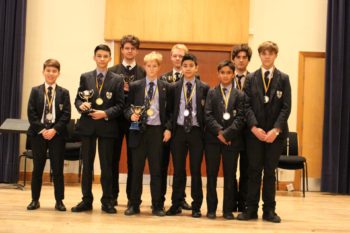 Tuesday 13th November saw the return of the Whitgift Woodwind Competition. With three classes catering to a whole range of abilities, the standard of performances was consistently high throughout. Competitors performed a range of challenging repertoire with great confidence and, with detailed feedback and advice given by our adjudicators on the day, the competition once again proved a rewarding experience for all who took part. Winners on the day were: Lower First Form clarinettist, Joshua Dunaway, in category A (up to Grade 3); Third Former, Rishi Patel, in category B (Grade 4-6); and Sixth Form student , Marian Bozhidarov, in the advanced category C.

“Give sorrow words; the grief that does not speak knits up the o-er wrought heart and bids it break.” 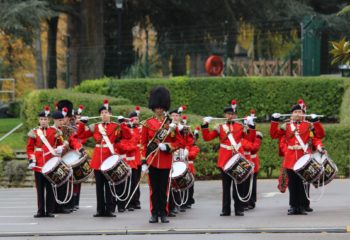 On Friday 9th November, Whitgift held a poignant Remembrance Day assembly and service for the School, marking the 100th anniversary of the end of World War I. The morning assemblies for Lower School and Upper School were honoured by a visit from Old Whitgiftian Colonel Michael Cornwell OBE, who gave tribute to all the OWs who participated in the First World War. Head of History, Mr Keith Smith delivered an engaging talk on the history of the war, asking half of the boys in the hall to stand up and physically represent the 251 Whitgift boys that went to war 100 years ago. There were also readings by the boys from soldiers who lost their lives. Headmaster Chris Ramsey closed the assembly with some thoughts on how to remember all those who gave up their lives in the line of duty.

After assembly the Lower School congregated in preparation for the annual remembrance service, opened and led by Reverend Alan Bayes. Members of the CCF performed the role of Flag Party including the tradition of flags at half-mast, followed by the laying of the wreaths by Head Boy, Ben Goldby, History Teacher, Mr Oliver Roberts, and Old Whitgiftians Lord David Freud and David Straw. The Whitgift Corp of Drums did an honourable job of playing at the start and end of the service. The Headmaster was delighted to receive OW Reginald Gordon Hill’s set of campaign medals, presented to him by Old Whitgiftian Nigel Platts, who generously donated the medals as a thank you for his time at the School and his 10 years as School Governor. Reginald Gordon Hill lost his life on 11 October 1917 serving in the Royal Army Medical Corps [R.A.M.C.] in France. The framed medals will be displayed in the Whitgift Archive for visitors who wish to view them or learn more. 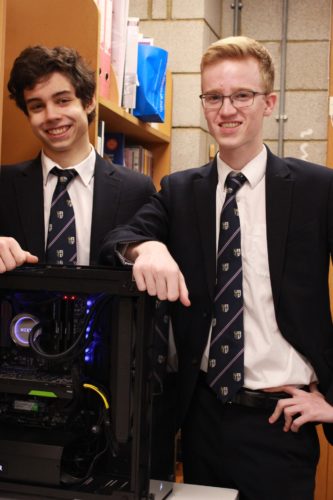 In science news, Upper Sixth Formers, Freddie Rawlins and Andrew Bonner, have been working closely with Mr Taylor (Physics Teachers and Head of STEM) to build a new computer for the STEM department at Whitgift. Their work began last term, conceptualising the plans and developing the core requirements; the computer needed to be able to run simulations and edit complex Computer Aided Design (CAD) files.

The team’s design utilised industry-level components and water-cooling technology; the boys were involved with all elements of the project, from ordering the parts to building and configuring the computer. The new equipment has massively broadened creative potential throughout numerous departments and projects, as well as allowing students to ensure that the size and scale of their modelling is suitable for the real world. Some of our A Level Design Technology and Engineering students plan to use the computer to show a concept design to their clients, enabling them to get much better feedback about their products.

“I have no spur
To prick the sides of my intent, but only
Vaulting ambition, which o’erleaps itself
And falls on the other.”

It seems that the ambition of Whitgift Hockey surpasses even that of Macbeth himself, with another incredibly exciting coach being added to the roster. The school are delighted to welcome back Mr Ashley Jackson; after training the boys last year during the Michaelmas and Lent terms, he is joining the coaching team for 2018/19. Mr Jackson is England and Great Britain’s all-time leading goal scorer, and three-time Olympian (Beijing 2008, London 2012 and Rio 2016). He joins the highly experienced coaching team, including National League all-time goal scorer, Mr Tim Davenport (300 Goals) and his brother Mr Wesley Jackson. Dr Karl Stagno, Director for Hockey said, “Mr Jackson will give a perspective unlike any other on the pitch and we look forward to the coming weeks as we welcome such a memorable opportunity.”

“Be bloody bold and resolute.”

And so to conclude, we come to rugby. I stated in the last newsletter that if the school won the rest of its block fixtures, it could claim to be one of, if not the best rugby school in the country. Well, I am pleased to inform you all that this came to pass. In the block fixtures that occurred after half-term, these were the results: RGS High Wycombe, Won 12 (including all A teams) Lost 4; Dulwich College, Won 16 (including all A teams) Drawn 2 Lost 5; Millfield, Won 6 Lost 2; Cranleigh Won all 9 fixtures!

This really has been an incredible season, with no fewer than seven teams winning all their fixtures – including the U11, U13, U14 and U15 A teams! With the Firsts and U15 sides also going strong in their respective National Cups, it was quite timely that England and British Lions OW legend (and former member of my all-conquering U14 A side!), Elliot Daly, came to visit in the penultimate week of term. In the morning, he spent time with the U16 rugby group and held a kicking clinic with some of the boys, sharing knowledge and working with them individually to improve their technique. In the afternoon, he held a special Q&A for all of the First Form who were keen to ask him questions about his career and were overjoyed to jump into a group photo at the end. It was clear from the expressions on the boys’ faces that they were elated to be given the opportunity to meet him. Hopefully he will inspire more Whitgiftians to follow in his footsteps.