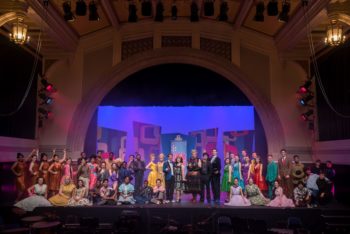 Whitgift’s theatrical production this term was the ‘big and beautiful’ popular musical, Hairspray. Best known for the 2007 film version starring John Travolta and Michelle Pfeiffer, the story follows the adventures of a larger than life Baltimore schoolgirl in the 1960s who just loves to dance. However, for what seems like a rather lightweight premise, the show is actually rooted in subject matter that is surprisingly hard-hitting, as is alluded to in the directors’ note in the programme: “segregation, prejudice, racism and body image stereotypes… Its ‘heroes’ are earnest and courageous; its ‘villains’ are deliciously detestable; and its ultimate message of inclusion, we hope, is one you will find irresistible when we reach the show’s famous final number.” So, another bold choice for the school’s performing arts team!

As ever, cast and crew rose to the occasion to put on yet another feast for the eyes and ears. Fresh from playing Macbeth as a fourteen year old last year, Fifth Former, Jack Godwin, took on the iconic drag role of Edna Turnblad. Wearing multiple padding, sparkly dresses and high heels must have been quite a challenge for someone more used to running down the wing in rugby boots for the U16A rugby team, but Jack pulled it off with aplomb to bring the house down on several occasions. He surely is a talent to watch for the future.

The other standout performance came from Old Palace Sixth Former, Olivia O’Sullivan, who absolutely nailed the main part of Tracy Turnblad, singing and dancing with such confidence and poise, that one might have thought oneself in the West End rather than Big School.

Directors, Mr Sami Michael and Mrs Faye Carter, praised the talent, humour and dedication of the whole cast, as well as highlighting the “troupe of formidable musicians who helped bring the production to life.” It seems that when Whitgift boys collaborate with girls from local schools, there really is no limit to what they can achieve!

Dramatic productions are not the only opportunities Whitgift boys get to work with girls: earlier on in the term, it was our turn to host the annual Upper Sixth Symposium with the girls from North London Collegiate School (NLCS). The symposium is designed to support independent learning by providing students with opportunities to conduct and collaborate in research and learn beyond the curriculum. It aims to promote Scholarships by offering students the ability to present, defend and evaluate ideas. 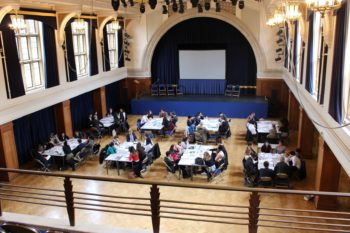 Whitgift students had been working with a partner student from NLCS since the start of the Michaelmas Term, identifying a topic to discuss from a range of disciplines such as science, medicine, history, economics, politics and engineering, in which they located cutting edge research before preparing a presentation on it. On the day of the Symposium, the students gave their presentations in pairs and then participated in open discussions with a wider group.

The Symposium is a great opportunity to practise skills that will benefit them not only at university, but also in the workplace while working collaboratively with a partner or group. This initiative has been in place for quite some time, but something new that is being trialled this year which is also intended to push the boys out of their comfort(testoster)zone is a Sixth Form book group with the girls from Woldingham school. The inaugural meeting was at Whitgift in November to discuss Sally Rooney’s Normal People. With 27 attendees, word has spread and more are expected at the second, this time at Woldingham, to discuss Donna Tartt’s The Secret History. Would it be too soon to say we have a millennial Bloomsbury Group on our hands? 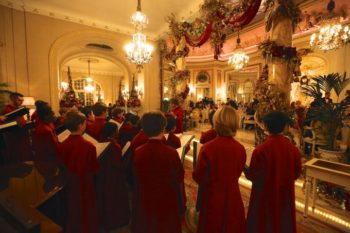 On the music front, the term finished with a trio of choral delights. On Saturday 30th November, the Chamber Choir made their annual pilgrimage to The Ritz Hotel to serenade the guests with carols to get the festive season off to a proper start.

On Friday 6th December, they joined up with the String Orchestra to perform the Christmas Concert at Hanover Square. Last but not least, there was the traditional Carol Service at Croydon Minster, which saw a variety of singers from across the school belt out seasonal favourites – a perfect way to bring on the end of term.

Inspired by the efforts of the boys, a group of around twenty five members of staff (including yours truly) mustered on the steps of the Concert Hall at 7.45 in the morning on the last day of term to welcome the boys walking up the drive by singing them carols. What started off as a low-key affair gradually became more raucous, and by the end, we were showcasing our wit by substituting words – ‘Do your to-op button up / Tuck your shirt in ple-ease’ works very well for Good King Wenceslas.

We were particularly proud of how we managed to time things so that we started Ding Dong Merrily On High exactly when Ding Dong started to chime. Teachers’ humour – you can’t beat it! 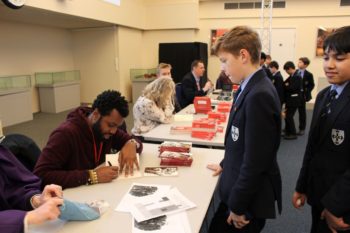 On Wednesday 20th November, the English Department held its annual Junior Literary Festival. So whilst the Sixth Formers were meeting with girls to discuss and debate the most pressing themes of Sally Rooney and Donna Tartt, the First Formers were witnessing a Samurai sword demonstration from Chris Bradford, the author of the Young Samurai series; learning about Rhythm And Poetry by rapping along with Karl Nova, Hip Hop artist, author and poet; and discovering the intricacies of chessboxing in a workshop run by Stephen Davies, author of Survivor: Titanic and Chessboxer.

Anything to further the boys’ love of literature! Indeed, these were just three of several activities which the boys partook in over the course of the day. All told, six authors visited the school and by the end of the day, over 150 books had been purchased!

In sport, the U13 swimming team achieved a first in November by winning the ESSA 4 x 50 Freestyle and Medley relays at London Olympic Park. To become National Champions, the boys had to break the school record for both events. They were naturally elated and the sports department could not be prouder of the team.

In another first for the school, Third Former, Cameron Oakley, won a national silver medal for the Whitgift Archery Club.

On more familiar territory, the rugby 1st XV progressed through to the semi finals of the National Cup with a convincing 50 point home victory over Simon Langton Grammar School in the area knockout final and more tense 45-31 away win against Abingdon School in the national quarter final. They are now set to face Sherborne School at Saracens’ home ground, Allianz Park, on Wednesday 4th March. The team’s results this season – Played 22, Won 19, Lost 3, Points For 883, Points Against, 198 – should provide them with a great deal of confidence. Indeed, their run in the second half of term included some very special performances, including a 31 – 10 away victory over Dulwich College and 62 – 0 home win over St Joseph’s College.

The only disappointment – a close 18 – 23 loss to Millfield – unfortunately coincided with the President’s Sportsman’s lunch. The Whitgift back line outplayed their illustrious counterparts (including Will Joseph – younger brother of England centre, Jonathan Joseph), but as was the case against Sedbergh and Wellington earlier on in the season, the forwards were outmuscled and lost the set-piece battle.

With the new year bringing in a new decade, there are a raft of exciting changes which await the school community as part of the development plan which I outlined earlier on this year, but one change occurring earlier than expected is the fact that the school will be seeking new patronage. In the official press release, Headmaster, Mr Ramsey, stated, “Following the Duke of York’s decision to stand aside from public duties, a decision has been made by the School and with the approval of the Court of Governors, to seek new patronages in the future.”

Whoever takes on the role will find a school which is not prepared to rest on its laurels, but rather press on into the new decade with verve and dynamism. Here’s to the next ten years at Whitgift!