If one were to compare this issue’s school news section with an equivalent one from previous Michaelmas terms, it might appear that this has been an uneventful, forgettable term. This could not be further from the truth. Indeed, the fact that we have made it through the term at all, what with the multitude of measures that have had to be adopted just to allow us to stay open, is quite some feat!

As such, the small victories that I am going to be commenting on – the Remembrance Service, House drama event, introduction of contact into rugby – should not be considered as small at all; rather, they have been significant milestones to be cherished in this most unusual of times.

Earlier on this year, I was very proud to announce that Whitgift had been appointed as the 2020 Independent Boys’ School of The Year. Well, I am pleased to report that we have followed up this prestigious award with another one, having been given the Outstanding Progress – Independent School Award at this year’s Education Business Awards. Now in their 15th year, these awards have established a reputation for showcasing success stories and examples of operational excellence in the UK Education System.

On Thursday 19 November, Whitgift was nominated for this award after half of our IB students achieved 40+ points in the International Baccalaureate, a feat typically achieved by only the top 10% of students worldwide. The awards ceremony, which took place online on Thursday 26 November, was presented by Comedian and Impressionists Darren Altman and Jess Robinson, both stars of Britain’s Got Talent. Whitgift was among some exceptional finalists and we are therefore honoured to have been selected as the winner by the judging panel. This achievement highlights the excellent work from the students, staff and parents at Whitgift. 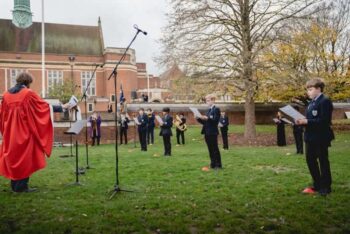 On Wednesday 11 November, Whitgift held a Covid-secure Remembrance Day service, honouring all those who lost their lives in the line of duty. Traditionally, the School invites Old Whitgiftians to attend, however as visitors are unable to come on site at present, the service was filmed and shared with OWs and the wider community. First Formers, socially distanced, watched from the field. The service began with the Corps of Drums and members of the CCF performing the duty of Flag Party, followed by Revd Alan Bayes opening with The Act of Remembrance. The horn of the bugle marked the lowering of the flags at half-mast, and all stood still for the one-minute silence.

Wreaths were laid in honour by: Head of Fourth Form, Mr Roberts, on behalf of staff; Mr Richard Blundell, on behalf of OWs and School Captain, Gus Bradford, on behalf of students. Lower School Captain, Nicholas Seal, gave a reading which was followed by the song For the Fallen by the Whitgift chamber choir. The second reading came from Gus Bradford, and the chamber choir was joined by members of the brass band for the hymn, O God, our help in ages past. The service ended with prayers, and the exit of the Flag Party and Corps of Drums. If you would like to view the service, a recoding can be found in the news section on the school website. 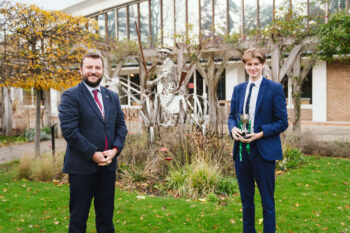 Of all the co-curricular activities offered by Whitgift, the two hardest hit by the restrictions imposed by the virus have been Drama and Music. It was, therefore, heartening to see them begin to get back on their feet in the second half of term. It was actually the House system which got the ball rolling with their annual Drama competition. Unable to take the usual form of live theatre this year, new Director of Drama, Mr James Hammond, set a challenge for each House to produce a 5-minute film instead. There was still the usual frantic buzz and energy around the School as students finished scripts, organised rooms for rehearsals and got their cast and crew together.

However, this year students had the added challenge of choosing locations around the school site and filming within the Covid-secure guidance. Each film was reviewed by judge, Mr Daniel Pirrie, former Director of Drama at Whitgift, before a 50-minute online video premier for the School community in the evening on Friday 13 November. ‘A Comfier Seat’ by Tate’s was the evening’s winner, meaning they held on to their title as Drama champions for yet another year. Helmed by rising star, Kit Connor, the piece was so slick Mr Pirrie commented that he could have been at the Southbank watching professional short film making and that it had grasped what makes short film so compelling.

The second half of term saw the music department finally able to hold rehearsals for ‘cross-zone ensembles‘, as they were dubbed – basically, boys from different year groups in bands and orchestras were able to rehearse in the same room, but more spread out than usual and behind Perspex screens. The monumental effort to get these up and running has been worth it as November and December saw a flurry of performances from a variety of groups.

On Sunday 1 November, the Minster Choir sung the Choral Evensong at Croydon Minster in a service which went out live on BBC3. On Friday 4 December, several different ensembles performed a Michaelmas recital in the Concert Hall; par for the course in previous years, but a logistical miracle this one!

To round things off nicely, the choristers shone again in the annual Carol Service, which was streamed live to the Whitgift community from Big School on Thursday 10 December, and then, as last year, the staff choir serenaded the boys with Christmas classics as they walked into school on the last day of term. Clips from many of these and more can be enjoyed on the school’s Twitter feed if you would like to hear what the boys and staff managed to achieve.

Finally, in addition to the dulcet tones of instruments and voices in harmony, November also saw the return of another sound that had been greatly missed at Whitgift, although this was of a very different nature. When the RFU announced that contact training could return towards the end of the month, and then a modified version of the game itself from December, the initial impact was almost imperceptible. However, as the realisation of what this meant began to spread throughout the school, a buzz in the air began to grow and the sense of excitement became almost tangible. Props began to lift their heads out of their books and look out the window towards Bigside instead; second-rows stopped scouring the top shelves of the library and began to migrate towards the wide open spaces that awaited them outside; and flankers closed their lap-tops and laced up their boots in anger for the first time since March. Yes, tackling was back!

A new symphony of grunts, defensive calls and the crunching sound of flesh on flesh was to be written. The backs had enjoyed a lovely few months honing their passing skills playing the Ready for Rugby game offered as an alternative by the RFU, but it was a pale substitute for the real thing and now it was the forwards’ turn to come out to play. You could detect a hint of manic glee in Mr Wilkins’ eye, our esteemed head of rugby and a former gnarly Wasps forward himself, as he spread the news to boys and coaches: that’s right, next term school rugby fixtures are back (presuming, of course, that there is not another u-turn!)

Dulwich, Epsom, Millfield… it will be good to see you again!