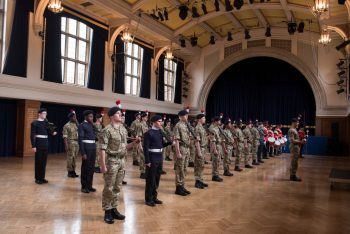 The Whitgift CCF Annual General Inspection is always a highlight in the School’s calendar and this year was no exception. In recent years, we have been blessed with spectacular weather for the occasion, but this year, the boys and staff had to cope with ominous grey skies and unfriendly showers. They rose to the occasion magnificently and produced arguably the best spectacle in recent years. Undaunted by the wet weather, the boys still managed to complete all the scheduled activities, including: obstacle courses, command tasks and tug-of-war competitions on Big Side; shooting in the school’s indoor range and kayaking in the swimming pool; and survival exercises, paint-balling, camouflage and concealment in the Copse.

The only compromise made due to the inclement weather was that the boys performed the Guard of Honour in Big School. The sound of the Corps of Drums reverberated around all the classrooms that afternoon, and I for one think that this should become a tradition carried out every Friday; it certainly added to the atmosphere in my Henry V lesson – “Once more unto the breach” indeed! The day was rounded off by a very spirited Platoon Attack demonstration across Big Side. 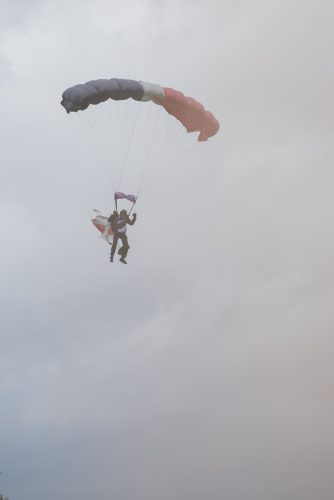 The icing on the cake was the RAF Wings Parachute team jumping onto the hallowed turf. One of the jumpers was sporting a very fashionable look by attaching the OW flag to him; it’s always good to have friends in high places!

The inspectors this year were Old Whitgiftians, Brigadier Neil Sexton, accompanied by Colonel Matthew Birch. Brigadier Sexton rated Whitgift CCF as “excellent” and one of the very strongest in the country. He was full of praise for the positive spirit of all the boys, their team work, the vast array of activities and the excellent leadership of the older boy NCOs. He thanked all the parents for their support, the staff for their hard work on delivering the CCF programme and the very productive and popular partnerships with Thomas More Catholic School and St. Andrew’s CE High School.

We certainly have been seeing a lot of our patron, HRH The Prince of York, in recent times. Prince Andrew visited the school at the beginning of May for a garden naming ceremony. Following a rousing welcome by the Whitgift Corps of Drums (they earn their keep!), the Duke was met by the Headmaster, senior members of staff, prefects and representatives of the Whitgift Foundation and Governors. He then enjoyed a short musical recital by Marian Bozhidarov, Lower Sixth Form Music Scholar, who played Czardas by Vittorio Monti, before being introduced to staff involved in Whitgift’s Primary School Project. Since 2000, the School has been offering primary aged children from more than 30 schools across the Borough of Croydon the opportunity to spend time at Whitgift.

The School’s water garden underwent a major refurbishment in 2017, with new waterfalls, bridges, lighting, planting schemes, a teaching hub, and the installation of a new circular path making the entire route around the garden fully accessible. The morning was concluded by addresses from both the Headmaster and the Duke, during which an engraved plaque was unveiled, officially naming the garden the “Duke of York Water Garden”, in honour of the Patron. The Duke’s final act was to plant a June Berry tree to complement the flourishing new planting scheme. 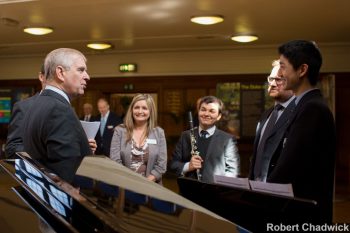 They say you can never get enough of a good thing, and so Prince Andrew must have been pleasantly surprised when Whitgift descended upon Buckingham Palace later on in May. To be more precise, eight Sixth Form boys were lucky enough to be specially invited to the Palace to be awarded their Duke of Edinburgh Gold Awards by none other the main man, Prince Philip, himself. The royal connection just keeps on growing!

During the April holiday, over 70 Whitgift cricketers across all age groups attended a four-day training camp at the Desert Springs Cricket Academy, popular with the likes of Lancashire CCC & Leicestershire CCC, in the south of Spain. The boys were put through their paces during various daily sessions which included: grass net practice; strength, running, speed and agility work; and match sessions on the new cricket ground at Desert Springs. All the hard work seems to have paid off with the results so far being nothing short of phenomenal! As I write this, all of the A teams other than the U11s are unbeaten and going strong in the various national and county competitions. It is also heartening to note that more senior XIs are being put out than in recent times (we have stretched to a 4th XI, something not seen since my time here!) and the 2nd XI are also unbeaten, having won five from five. Indeed, such has been the school’s success, that the Australian men’s cricket team chose it as a venue to train at again, maybe hoping for some of the Whitgift magic to rub off on them!

In table tennis, the U19 team, double national champions in their age category, headed off to Malta, in April, for the 2018 International School Sport Federation (ISF) World Schools’ Table Tennis Championships. Whitgift’s team of James Smith, George Hazell, Reiss Vydelingum and Jason Kwok had earned selection by winning the U19 ESTTA Butterfly Table Tennis national title for the last two years. Whilst in Malta, James reached the World Schools’ Table Tennis Mixed Doubles Quarter Finals, narrowly losing to fellow England player, Joe Clark, and his Belgium partner, who went on to win the prestigious Friendship Doubles World Title. Earlier in the week, James had lead the all-Whitgift team, with his fellow U19 aficionados, to a creditable 13th place, representing England in the Team Championships.

In squash, Year 13 student, James Wyatt, was ranked No. 1 in the country for the U19s when the England Squash Junior Rankings were officially announced earlier this year. James has a total points tally of 1058.50, 104 points clear of the runner-up.

11-year-old Augustin Bozzetto had a fantastic first year of skiing at national and international level. The Year 7 pupil took part in a number of competitions and ended the season in the top 50 nationally in France. He also came in the top 20 in the British National Championships, in Tignes.

Lastly, over the Easter holidays Whitgift had a number of footballers on international duty. Lucas Defise was called up (again) for the Belgium U17 squad, performing very well in a comprehensive 5-0 win over the Czech Republic in Prague. Year 9 pupil, Fionn Mooney, received his first call-up for the Republic of Ireland U15s, who also played Czech Republic, this time in Dublin. Fionn played well in the 2-1 victory, but unfortunately came off injured after 60 minutes. Finally, Fellow Upper Third Form pupils, Jadan Raymond and James Sweet, travelled with the Wales U15 squad to Belgium to play in the Tri Nations tournament versus the home nation and Switzerland.

The final reckoning for the hockey sides points to another outstanding year for Whitgift in the sport: national U16 indoor and outdoor champions, U14 national outdoor champions (for the third consecutive year) and U15 back-to-back Independent School Hockey Cup champions! If you also consider the fact that the U13s and U18s were both knocked out of the national outdoor competition at the semi-finals on strokes, it is conceivable to think that we could have actually gone one better than last year’s success (the U16 and U18 teams were national indoor runner-ups, the U13s and U15s both Independent School Hockey Cup champions and the U14, U16 and U18 teams being crowned national outdoor champions)! A remarkable achievement over the course of two seasons.

The Whitgift musicians also enjoyed a great deal of success. At the start of June, the Guildhall School announced the results of the Junior Guildhall’s most prestigious award, the Lutine Prize, and Whitgift students represented four of the six finalists. The competition, which showcases young talent, has been running since 1982 and is Junior Guildhall’s equivalent of the senior school’s annual Gold Medal competition. Having been successful in the preliminaries, six finalists got through to the final round, where they were required to perform a 20 minute solo recital. It was a privilege to have such a high proportion of Whitgift students make it through to the finals, and we congratulate all the Year 12 musicians: Alex Ciulin on the cello, violinists Krystof Kohout and Luka Perazic, and Marian Bozhidarov who played the clarinet and was awarded second place.