On Thursday 15th March, a select group of Whitgift Upper Third Formers took part in the BBC News School Report Day, putting together a series of stories on the current affairs of the time in the morning and then broadcasting live from the Founder’s Room from 1.00pm. This is a fantastic venture and now the fourth year the school has taken part in it, and it got me thinking… if I were to structure this news from the school segment as a news broadcast, what would I lead with? What would my headlines be?

From the headquarters of the Whitgift English Department, this is the May – June news from the school, with Dominic Edwards:

It’s been seven years since Whitgift’s last visit to Twickenham for a national rugby final. On that day, the First XV crushed Oakham school with future stars, Elliot Daly and, more importantly, Jordan Lewis of table-topping Old Whits’ RFC fame, running the opposition ragged. This year, the Firsts could not match the heroics of their predecessors, falling to eventual champions, Warwick, in the semi-final. However, the mighty U15s vanquished opponents, Hampton, in their semi-final, and so the school was not to be denied its trip to HQ. And so it came to be that on lovely sunny day in March, all of years 9 and 10, along with yours truly (somebody’s got to supervise!) and several other members of staff descended upon Twickenham to see our intrepid band of brothers take on the Hordes of the North – well, Manchester Grammar School to be precise – in the final of the Natwest U15 Cup. The boys were fantastic on the day, overcoming a skilful and unflagging opposition 22-12. This capped off an unbeaten season and was a testament to all the hard work put in by the team and coaches. The U14s also went through the entire season unbeaten and finished things off by winning the national, Rosslyn Park 7s. Maybe another visit to Twickers beckons next year?

Other national successes included: the U19 table tennis team, who brought back the National Butterfly title to the school for the second year running, beating Plymouth’s Eggbuckland Community College 7-1 in the Grand Final; the U13 football side, who won the ISFA National title for the seventh time in eight years, beating Hertfordshire’s Lochinver House 8-2 in the final at the Burton Albion FC ground, Pirelli Stadium – a truly astonishing achievement; and last but not least, the U12 Biathlon team, who overcame snowy conditions at Crystal Palace to win the British Schools’ Modern Biathlon Championships final, beating the school’s B team into second place!

The basketball season has certainly been an exciting one for Whitgift so far this year. The sport has been growing in popularity for a number of years and the hard work and dedication of the players and staff has been paying off. Both the U15 and U16 sides won the London Leagues for the first time. Both teams had to defeat City of London School in their respective finals and whilst the U16s won fairly comfortably, 75-60, the U15s had to fight back in the last quarter from a ten point deficit to ultimately claim a 76-68 victory. The captain of the U15s, Upper Third Form pupil, Myles Alcindor, scored an incredible 54 points in the match, a school record by quite some margin! He is hoping to follow in the footsteps of Upper Fifth Form pupil, Josh Uduje, who celebrated his recent selection for the England U16 team by being scouted by global brand, Nike, to be part of their ‘Nothing Beats a Londoner’ campaign. Whether you’ve been shopping on Oxford Street, had a trip to the cinema, or simply been surfing online, you will have seen this advert which is helping to put Josh on the map; next thing you know, he’ll believe he can fly!

An incredible fourteen teams made it through the hockey season unbeaten, including the entire U12 age group – U12 A, B, C, D and E! Also, all of the top senior sides have either won (U15A) or are through to the final rounds of (First XI, U16A, U14A) their respective national competitions. The U15s beat QEGS Wakefield by a comprehensive 5-0 margin in their final in March; hopefully, the other sides can follow their example in their final matches in April. 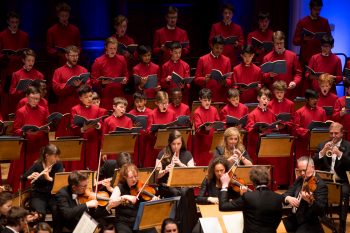 On the final Wednesday of term, the school put on a magnificent Spring Concert at the illustrious Cadogan Hall. The packed audience were treated to a wonderful programme of classical music as the Chamber Orchestra, Symphony Orchestra and Chamber Choir collaborated with the Royal Philharmonic Orchestra to perform Mendelssohn’s Symphony No. 4, Mozart’s Clarinet Concerto and two Bach pieces: Magnificat in D Major and Toccata and Fugue in D minor. The evening was a triumph and the boys involved were noticeably moved by the rapturous applause they received from the fantastic audience.

In maths, a four-student Whitgift team took part in the Hans Woyda Competition – a London-based Maths league comprised of 64 schools. The team of Anant Gupta (L5), Kai Lam (U3), Shintaro Nishijo (U6) and Nichika Waragai (L6), successfully came through all the knock-out rounds and held their nerve during a tense final to win on the very last question 43-41. The last time Whitgift triumphed in the Hans Woyda was back in 1983, when we drew in the final. This year, Whitgift were confident challengers throughout, winning against St Dunstan’s College (61-34), St Paul’s School (57-41), Hampton School (50-37), and City of London School (43-41). 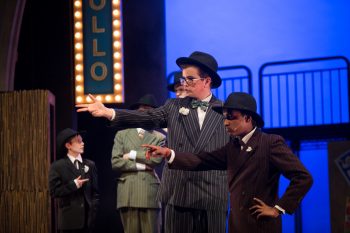 In the first two weeks of March, Whitgift pulled off the incredibly impressive feat of putting on two first-rate shows, one after the other, utilising completely separate casts. From 7th-10th March, Big School was transformed into glitzy 1920s versions of New York and Havana, Cuba, for a razzmatazz production of Guys and Dolls. Marius Hatteland-Dunn and Joe Barber led a fantastic ensemble as rival gamblers, Sky Masterson and Nathan Detroit, looking to scam each other out of huge sums of money, but unwittingly falling in love whilst doing so. As ever, the school orchestra provided excellent support. Barely had the final rippling of applause died down after the last show, before the poor tech team had to disassemble the magnificent stage and start to put up another one. From 15th-17th March, the Performing Arts Centre was transformed into the court rooms and military bases made famous by Aaron Sorkin’s play (and subsequent film) A Few Good Men. Some might argue an original film line-up including the likes of Tom Cruise, Demi Moore, Jack Nicholson, Keifer Sutherland and Kevin Bacon, are incredibly big shoes to fill, however, the cast of Sixth Form students from Whitgift and Old Palace were excellent. The current Upper Sixth Form has produced some of the best actors that the school has seen in recent years, and all of this golden generation gave their swansong performances in this utterly compelling production apart from one. George Jaques was too busy to perform as he was working on his own project, the upcoming play, Breathe, for his own, independent theatre company, Athenaeum Productions. Having written the play, George will also star in it. The show will be running for five nights, 31st July – 4th August, at The Bunker, one of London’s newest theatres – a subterranean space near London Bridge championing ‘exhilarating contemporary theatre’. To support the endeavours of George and his cast and to find out more about the Athenaeum Productions, visit: www.athenaeumproductions.com. 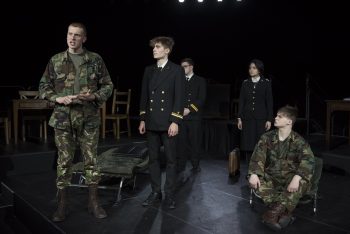 Finally, what do Simon Armitage and Eddie Jones have in common? It might sound like the beginning of a ‘hilarious’ joke, but not at Whitgift! Both visited the school during March to pass on their wisdom in their respective fields to boys and staff alike. On Friday 15th March, the school was delighted to welcome Simon Armitage CBE, celebrated poet and Professor of Poetry at the University of Oxford and the University of Leeds, as part of our Academic Enrichment Programme. Not just a poet, Simon is also a lyricist and broadcaster who writes extensively for television, radio and theatre. Whilst at Whitgift, he ran an analytical session about how to approach poetry, with a select group of 40 Fifth Form and Sixth Form boys, using the poetry of Thom Gunn, Ted Hughes, and Elizabeth Bishop as springboards into a more wide-ranging discussion. Later in the day, Simon spoke with wry wit about his career and interests to-date, interspersed with engaging and droll reading of his poetry, to a packed out Concert Hall.  On Wednesday 28th March, current England rugby coach, Eddie Jones, popped in. He had lunch with the rugby coaches before taking a training session with First XV squad. Tragically, I was teaching and so could not watch, but from all accounts, the boys gained a huge deal from the experience. Given Eddie’s propensity to pick exciting, young players fresh from school as apprentices in his England squads, who’s to say that one of the current crop won’t find their way to the Pennyhill Park training base to train with the likes of Elliot Daly and Harry Williams over the next couple of years?

And that’s this this month’s news from the school. I’ll be here again in July, but for now, from me, it’s goodbye.