News from the School – National Champions! 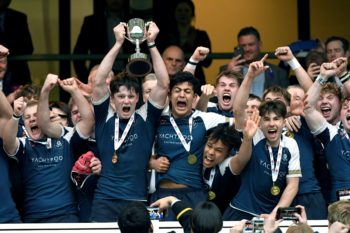 During my eighteen years teaching at Whitgift, I have been lucky enough to be present at Twickenham for our last five appearances in national rugby finals, all of which have seen the school emerge victorious. My first trip, back in 2003, saw a Danny Cipriani inspired U15 side outplay a much-fancied Millfield; my second, in 2010, saw a First XV packed with future international and professional players crush Newcastle Grammar, and was followed by more of the same in 2011, this time against Oakham; the fourth, last year, saw a monstrous U15 side steamroll Manchester Grammar.

None of these, however, could compare with the sheer drama and spectacle of this year’s offering, with the First XV only really pulling away in the final minutes from the sternest of opposition in Warwick School (who were going for a hat-trick of victories), to edge the contest 32-22. The boys who played on the day were, quite simply, magnificent and did the school proud. It was a pleasure to see the fleet-footed fly-half, Ed Dunford (Wales U18) open his box of tricks to unlock the tightest of defences and, whilst it was also a joy to see our other two schoolboy internationals, back-rowers Harry Dugmore (England U18) and Harry Breeze (Wales U18) tear around the Twickenham turf, it was arguably the non-capped back-rower, captain Oliver Norris, who was the pick of all the players, as it was he who bravely charged down a kick in the opening seconds to score the first try and who, even more impressively, plucked our own kick-off out of the air to set up the final try. This was pivotal, as it arrested Warwick’s seemingly unstoppable momentum and wrenched the game back Whitgift’s way. 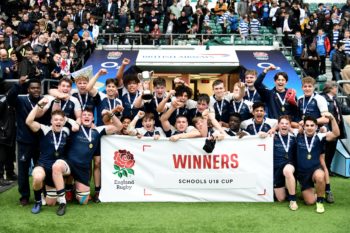 The match was described by school rugby website, fifteenrugby.com, as one of the greatest schoolboy finals ever played, and both the team and the massed ‘barmy army’ of supporters (made up of the Sixth Form, a select group of lucky staff, parents and an impressive number of dedicated OWs) were elated at the final whistle. I have to admit that this particular OW shed a tear at that moment, as I looked up to the heavens and thought how former schoolmaster and Whitgift rugby legend, Ken Nicholas, would be looking down on the boys with a great beaming smile: a Welsh Grand Slam at Cardiff on the Saturday and a Whitgift national triumph at Twickenham five days later – a fitting send off for a great man.

The only downside of the day was that the U15 team were not there too. Unfortunately, they got knocked out of the cup in the semi-final, even though they did not lose the match and, hence, maintained their three-year unbeaten record. On the day, they would be the first to admit that their performance was under-par, and they could only muster a 15-15 draw with a Wellington College side that they had beaten comfortably earlier on in the season. Due to scoring one try fewer than the opposition, the boys could go no further in the competition and this proved even more frustrating on the day of the final, when Wellington beat Northampton Boys comfortably.

Of course, this was the second of two semi-finals that Whitgift were involved in, the other being the First XV’s 57-15 crushing of Marlborough College the previous day. Both matches took place at Saracens’ home ground, Allianz Park, and were extremely well supported by hordes of fans. Whitgift rugby certainly finds itself in a healthy place right now!

From rugby, we move onto the sport that the school has had arguably even more success in during recent years, hockey. The 1st XI have enjoyed another magnificent season, defeating all schoolboy opposition; indeed, they may yet match the exploits of their rugby counterparts, having progressed into the semi-final of their national cup in the penultimate week of term. The U16s, 15s and 14s also all enjoyed excellent seasons, but unfortunately did not manage to progress into the finals of their respective national events. The future is still bright for Whitgift hockey, however, with the U13s beating St George’s 5-0 to win their national final, and the U12s going through their 25 match season unbeaten, winning 24 of their fixtures and drawing 1.

Finally in sport, the Whitgift fencers achieved some outstanding results at the Public Schools Fencing Championships, Crystal Palace 12-14 March 2019. The boys finished as top school in the U14 age category across all three weapons and 2nd placed school across all age groups and all weapons. Special praise should go to Omari Campbell-Okolo and Ben Linsday, who finished second and third in the U14 Epee and U18 Sabre respectively. 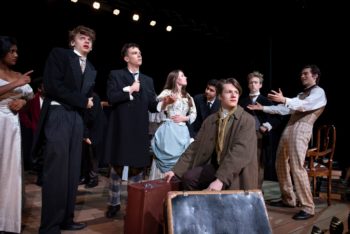 In drama, the plays just keep on coming! This year’s Sixth Form performance was The Sneeze, a collection of short stories and one-act comedy vaudevilles by Russian playwright Anton Chekov, adapted by Michael Frayn. The production opened with Drama, where Whitgift drama stalwart, Jude Willoughby, played the role of Pavel, a sarcastic and much too busy script writer, and Yasmin Irving (Old Palace of John Whitgift School) played the melodramatic role of Murashkna, the dame auditioning her script who meets an unfortunate and shocking denouement.

All the performances that followed were equally impressive, especially considering many of the Sixth Form actors had never previously taken on an acting role. The play that hands itself to the title, The Sneeze was a very entertaining story of a Government Clerk, who on a night out with his wife, accidently sneezes on a General sitting directly in front of him.

Archie Day who plays Chervyakov (the sneezer), did an excellent job at depicting the horror that plagues him throughout, as well as Jacob Rose who played the General Brizzhalov, whose expression during the slow motion replay of the sneeze was highly amusing. Arguably, the highlight of the night was Charlie Barber’s performance during The Evils of Tobacco, where he captivated the audience with his take on the character of Nyukhin, cleverly using his voice and quirky mannerisms to depict a tragic and lovable character.

At the beginning of March, the Whitgift Chamber Orchestra (WCO) performed pieces from Mendelssohn, Strauss, Vivaldi and Paganini culminating in Beethoven’s Eroica Symphony. The first movement from the Horn Concerto No.1, Op.11 by Strauss was an enjoyable piece, specifically when soloist, Lower Sixth Form student Adam Field, played many arpeggiated chords, reminiscent of a hunting call, which demonstrated his velocity and skill.

Equally impressive was the three movements from Double Cello Concerto in G Minor by Vivaldi with solos performed by Upper Sixth Formers, Alex Ciulin and Kosta Popovic. Unusually performed by two soloists, this piece was originally written for an all-women orchestra. The cellists bow movements were breathtakingly swift. The two cellos echoed and mimicked each other, almost like a conversation. It was evident the hours of practice paid off when it came to learning and perfecting it.

Overall, the concert had incredible performances by the soloists and Whitgift Chamber Orchestra. Director of Orchestral Music and conductor of the event, Mr Philip Winter commented, “To play Beethoven’s Eroica Symphony is a challenge for a professional orchestra and a fantastic achievement for the members of the WCO; the depth of musical understanding needed is enormous and everyone who took part rose to the occasion to a very enthusiastic audience.”

Finally, whilst all these co-curricular triumphs are occurring, let us not forget that our main aim in the day-to-day running of the school is the academic enrichment and pastoral care of the boys. To that end, the number of guest speakers invited to challenge and inspire the boys in a variety of different ways just keeps on growing.

The PRISM society’s Friday lecture has this term seen philosopher and CEO of iDiscover, Gal Stiglitz, pose the question ‘What is the most important skill of the 21st Century?’; eminent OW, Lord Justice Lindblom, address the boys about his experiences gained from rising to the top of the British justice system; as well as a number of staff and boys speaking on academic interests of their own.

In February, the sports department invited Richard Shorter aka the ‘Non-Perfect Dad’ to deliver a talk on how to build character through sport. An inspiring speaker, Richard is dedicated to enabling parents and sport teams to work together through courageous and honest parenting. The talk also discussed how parents can facilitate positive conversations based on character rather than results, whether that is academia or sport.

Most recently, on World Book Day, children’s author, Nick Cook, visited to deliver an extended assembly to the Lower School boys before delivering a series of writing workshops to boys in English lessons.

There never is a dull day at Whitgift!