Following the record-breaking set of IB Diploma results detailed in the last edition, I am delighted to inform you that Whitgift has been ranked as the number one all boys school in the UK’s 2016 IB table! A Level boys achieved equally high standards (with 89.2% of all the grades awarded being at A*-B) bringing the A*-B rate for A Level and IB combined to 90.2%. The school is also in rude academic health in the lower years, with the GCSE A/A* rate once again breaking through the 80% barrier – no mean feat considering the amount and variety of subjects that the boys take. 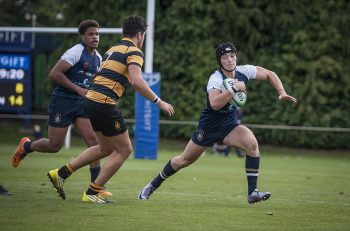 In rugby, the First XV have enjoyed an extremely promising start to the season, winning the President’s Cup at Esher on the first weekend and, more recently, cruising through the second round of the Natwest National Cup with a 60-0 victory over Eltham College. Ironically, competition has been much more fierce and the results tighter in the ‘friendly’ fixtures, with victories over Skinners and old enemies John Fisher being counterbalanced by incredibly close losses to Sedbergh and Warwick. The tightest match of all, however, was the magnificent 15 – 14 win over Wellington College, who have swept the floor with every other school they have played. Extra significance was attached to this fixture as it was designated as a memorial to Sebastian Adeniran-Olule OW (2006-2012), a Harlequins player of immense potential who had attended both Whitgift and Wellington, and who tragically died earlier on this year in a road traffic accident. The event was well attended and a raffle was held to raise money for the Sebastian Adeniran-Olule Charitable Fund, which has been established to provide educational and sporting opportunities for boys who wouldn’t normally be able to access them.

In hockey, the Charlie Hutton Testimonial match was won 7 – 3 by the First XI in a game of pulsating action and high skills that is a continuing testament to Charlie’s incredible but all too short time at Whitgift. In other results, the Firsts remain unbeaten, with notable victories being against Millfield, 7-0, and Oxford University, 3-2.

Whilst the school’s golfers could not quite recreate the glorious scenes from last year of winning the highly prestigious HMC Foursomes on the last hole of the competition, they have, nevertheless, still enjoyed a great deal of success. The first team was victorious in the HMC singles competition at Berkshire Golf Club on October 4, and three of that team – Sixth Formers Harvey Byers, Alfie Fox and Harry Plowman-Ollington – have been selected to play in the Friendship Trophy, an annual quadrangular golf match between Surrey and a provincial representative team from Catalunya (Spain), Midi-Pyrenees (France) and Nordrhein Westfalen (Germany). This is a highly competitive tournament, which Surrey has won for the last three years. They will be defending their title in Spain, at the El Prat Golf Club, at the end of November.

Upper Fifth Former, Tarriq Roach, started the fencing season on a high, competing in the second part of the U17 British fencing ranking series, in Canterbury, at end September. He performed outstandingly and won the competition against 48 competitors from across the UK, moving up into 1st place in the Cadet Epée rankings.

Another boy flying high in a specialist sport is Upper Sixth Former, Piers Bellman, who has been called up to the Welsh national skiing team. Piers, who had never considered ski racing seriously until he came to Whitgift, aged 11, took up the sport with the school’s Outdoor Education co-curricular programme. Fast forward a few years and Piers was starting to win medals at the annual Independent School Ski & Snowboard Championships, in which the School participates annually in the French Alps. Now, the 17-year-old is looking forward to his first national competition at the Welsh Championship, in Champéry, in January. Maybe we have a future Winter Olympian in our midst? 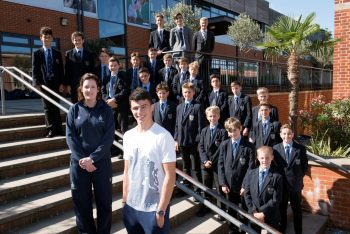 From one potential Olympian to a fully-fledged one… Old Whitgiftian, Joseph Choong (2008-2013), visited the school earlier this month to share his recent Rio Olympics experience. Although still considered a junior athlete, he was selected to represent Great Britain and was the youngest member in the Team GB pentathlon quartet. He performed outstandingly on his Olympic debut, securing a top 10 finish. During a day which included taking his first-ever assembly, signing shirts and fielding a Q&A session, Joe took some time out to be interviewed by Whitgift modern pentathletes, Josh Coniglio (Upper Sixth Form) and George Simpson (Lower Fifth Form). If you are interested, there is a link to the full interview on the school’s website.

In what has been a rather sport-heavy report, I am pleased to finish with a couple of cultural highlights. National Poetry Day, which fell on Thursday 6th October this year, was launched in 1994, and has gone on to inspire millions of people throughout the United Kingdom with poetry through a range of live events and web-based activities. To celebrate it this year, Whitgift invited performance artist, Talia Randall, to the school. Talia’s work is about speaking the unspeakable and capturing moments that we all share but find difficult to communicate. She gave an excellent assembly to Fifth and Sixth Form students, and a poetry performance to Third Form students in Big School. This was followed up by poetry workshops throughout the day and an informal meeting with students in the Raeburn Library at lunch time. The boys gained a huge amount from this experience and work that was produced as a result of it will be published in a school anthology later on in the year. 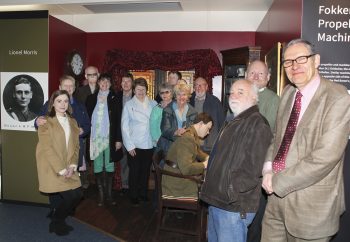 And last but not least, a very interesting reunion… On 17th September 2016, relatives of Manfred von Richthofen, the ‘Red Baron’, and his first victims were brought together for the first time, at Remembering 1916 – Life on the Western Front, Whitgift’s major First World War centenary exhibition. One hundred years ago to the day, the Red Baron, the ‘ace of aces’ of aerial warfare in the Great War, shot down a British plane in the skies above Northern France, piloted by Old Whitgiftian, Lionel Morris, with Tom Rees as Observer. To mark the Centenary of the aerial dogfight, relatives of the three airmen came together to remember and respect this historic event at a special commemorative dinner: Jill Bush, cousin of the 19-year-old pilot, Lieutenant Lionel Morris; Dr Meriel Jones, great-niece of 21-year-old Observer, Tom Rees; and Baron Donat von Richthofen, great-nephew of the Red Baron (who was just 24 years old in 1916). The poignant meeting of the relatives of these historic figures was covered by ITV London Tonight, BBC Radio 4’s Today programme, BBC Radio Wales, The Telegraph, The Times and the Daily Mail.