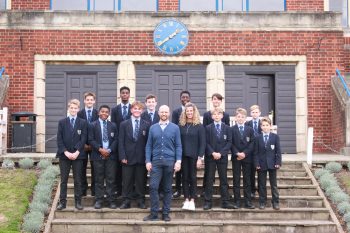 The Whitgift Summer School took place for the third time this year and was once again a roaring success. Over a six-week period during the long summer holidays, the school played host to hundreds of boys and girls from all over the world, as they looked to improve their English whilst at the same time taking advantage of all of the fantastic facilities on offer. Many members of staff and boys (as English student hosts) contributed to this wonderful scheme, and it is heartening to know that such a thriving, vibrant school as Whitgift is not lying dormant for weeks on end.

New Headmaster, Christopher Ramsey, has started the year off with a great deal of positive energy, dynamically addressing the staff and boys in the first few days of the term in a series of talks and assemblies. Indeed, I cannot remember there being quite so much anticipation for an inset day at any point during my seventeen years at the school! The Headmaster has repeatedly stated how impressed he has been by everything the school is currently doing, but has also stressed that the world of private education is an unstable one, and has outlined a convincing vision of how to drive Whitgift forward onto bigger and better things! If you would like to gain an insight into how he thinks, then check out Headmaster’s Blog, which can be found on the home page of the school’s website. From the future to the past, a timeline of the school’s history has been artistically rendered on the walls of the Raeburn staircase, leading up from the lunch hall to the Raeburn library and staff room. This wonderful display was part funded by the WSPA and is a super addition to the school. If you stand on a particular spot on the stairs and look up at the right angle, you can just about see Sir Daniel Harvey (OW 1632 – 38) looking down approvingly at Elliot Daly (OW 2006 -11) eviscerating the Auckland Blues defensive line in the recent British and Irish Lions tour of New Zealand. As a former English Ambassador to the Ottoman Empire, I am sure Sir Daniel would appreciate seeing a fellow OW achieving a great deal of success on foreign fields!

Speaking of rugby success, the school has enjoyed one of its best starts to the season ever, with no fewer than ten sides (including the U11, 12, 14 and 15 A teams) reaching half term unbeaten! By such lofty standards, the fact that the First XV have recorded two losses sounds like a major disappointment, but when one considers that these defeats occurred away to Sedbergh and Wellington College respectively, one realises that things are not as downbeat as they may seem. Indeed, the team has won its first two rounds of the National Natwest Cup handsomely and, following two other impressive victories in friendly fixtures against Hampton and Warwick, remain favourites to reach the Twickenham final (emulating Elliot Daly and the classes of 2010-11) in March.

Not to be outdone by their rugby compatriots, the hockey sides are also making waves on the schools (and universities for the Firsts!) circuits with the U14, 15, 16 As and the Firsts all making it to half term unbeaten. The school was also delighted with England Hockey’s latest National Age Group Squads (NAGS) selection announcement earlier in September, with multiple current students making the cut. The highest honour obtainable for a junior hockey player, NAGS entails attending England Hockey Performance Centres for specialist training, advice on nutrition, and strength and conditioning, as well as playing international matches. The following students were recommended to the U18 squad: Max Denniff, Adam Buckle (both Upper Sixth Form), Max Lowrey, Josh Gravestock (both Lower Sixth Form) and Matt Blood (Upper Fifth Form). In addition, Upper Fifth Formers Dylan Holland, Alex Findlater, Jake Phillips and Steven Rich were selected for the U16 squad. Finally, special congratulations should go to Upper Sixth Form pupil, Zach Wallace, for his inclusion in the England U21 Development Programme, a fantastic achievement for a 17-year-old.

In other sports news, the Modern Pentathlon Academy had a fantastic start to the season at the British Modern Triathlon Championships, in September. Remarkably, in the U13 individual titles category, the girls’ and the boys’ competition were won by Whitgift’s Modern Pentathlon Academy athletes. Lower Third Form pupil, Martin Van Domselaar, became the new British champion, whilst Gabrielle Holland (sister of Dylan and Luke, in the Upper Fifth and Upper Third Forms) secured the title for the girls. The U13 boys achieved team gold and the U13 girls team narrowly lost out, picking up silver. The second of four U13 boys’ teams from Whitgift earned the team silver. Whitgift won an additional British title, with George Simpson from the U17 boys’ team taking to the podium for individual bronze. Further individual bronze medals were awarded to newcomer Willem Millar-Neale (U11) and Quentin Aude-Lange (U13). George Simpson has even more to be pleased about, having been selected by Pentathlon GB for the Olympic Hopes competition, to be held in the Czech Republic. It is a great honour for George, who is still only 15 years old, as only four boys represent GB at U19 level. The event, which will take place in Prague from 20-22 October, is significant as it carries Youth Olympic Games World Ranking Points.

Last, but by no means least, is the well-known Whitgift sport of rally driving! Upper Sixth Form Prefect and rally driver, Ruairi Bell, had an action-packed summer, competing in the Lithuanian Vieksniai Rally. The event is part of his Baltic Rally Championship campaign, which takes place in Estonia, Latvia and Lithuania each year. The 17-year-old repeated his performance from last year, winning his class, and coming 7th in the competition.

Finally, the school has enjoyed its customary share of celebrity visitors to provoke both the boys’ academic and co-curricular interests. On National Poetry Day, author and poet Karl Nova performed to the Fifth Form in a special assembly and then ran a series of poetry workshops throughout the day. On Tuesday 26 September, Whitgift was privileged to welcome Olympic Gold medallist, Sally Gunnell OBE, and former England Rugby player, Matt Dawson MBE, as they visited the School for Meningitis Awareness Week, to speak to our Upper Third Form students. Matt’s son, thankfully now fully-recovered, contracted meningitis earlier this year. After making the students aware of the symptoms to look out for (teens are the second most at-risk group for meningitis), the multiple strains of meningitis that can occur and what actions they can take, the boys were given a pop quiz. The two sporting legends finished by taking questions. It was a thoroughly engaging lesson, and an inspiration to have two spokespeople who have achieved so much throughout their careers, take the time to promote this initiative.