An annoying feature of my timetable this year is that I have lessons on Wednesday afternoons, meaning I can never venture out to watch the First XV when they have a home midweek fixture.  I can, however, hear the cheers made by the crowd when Whitgift scores, and this has led to the unexpected consequence of some of the most dramatic lessons I have ever taught! When the team were facing up to local rivals, John Fisher, in the annual epic derby, I happened to be teaching Rudyard Kipling’s If, and just when I was reaching the rousing climax of the nation’s favourite poem,

‘If you can fill the unforgiving minute

With sixty seconds’ worth of distance run,

Yours is the Earth and everything that’s in it,

… a guttural roar erupted from Bigside as the Firsts sealed their 22-0 win with a magnificent try.

Incidentally, the 2nds and 3rds enjoyed even more comprehensive victories against the old rivals, winning 59-5 and 59-7 respectively; a rare clean sweep against John Fisher’s senior sides.

Just one week later, the Firsts were up against our other local rivals, Trinity, in the second round of the National Cup. During this fixture, I was teaching George Orwell’s classic, 1984. Whilst attempting to explain the ramifications of the analogy, ‘It was like trying to make a move in chess when you were already mated.’ for the oppressed protagonist, Winston Smith, I repeatedly had to contend with the joyous cheers of the Whitgift supporters, as the team racked up a frightening 65-8 score line against the gallant but ultimately vanquished Trinity boys, who certainly would have empathised with Winston’s forlorn state of mind by the time the final whistle was blown!

Not that it has all been plain sailing for the First XV. Initially, the success of the incredible summer tour to New Zealand was continued, with the boys beating Wellington College by a single try in a pulsating final to retain the Esher Cup. But Wellington were to prove too strong in the full fixture later on in the term, with the size of their pack being too much to handle.

The same was the case against Sedbergh in the first match of the season, meaning the side reached half term in a very similar state to last year’s team, having registered a series of impressive victories against many of the best schools in the country, but unable to knock over the two sides who really are at the pinnacle of the school game in England.

One team that did reach half term unbeaten are the U16 As. They were unlucky not to get to Twickenham in last year’s national competition, being knocked out by Wellington in a drawn semi-final by virtue of the fact they did not score as many tries. This year they gained revenge, beating Wellington 18-10 in a brutal fixture. In their unbeaten run thus far, they have also racked up scores such as 62-5 and 52-7 against Warwick and John Fisher respectively.

Much was also expected of the U15 As. The reputation they garnered last year as an unbeaten U14 side was such that this year, some teams (most notably, Warwick and Millfield) actually refused to face them. They began the season with a stunning 38-0 victory away at Wellington and continued to sweep all before them right up until the very last game before half term – the second round of the National Cup against Trinity, who also have a very strong side at this year group.

Due to a very unfortunate calendar clash, the fixture took place on the same day that five of the team were flying out to Valencia on a Spanish exchange. Losing a third of their players proved too much of a hurdle to overcome and Trinity were also outstanding on the day, playing some excellent rugby to triumph 28-13. It looks like I’ll have to rely on the Firsts to get my Twickenham trip this year!

In other sports news, the U15A cricket team had some unfinished business at the beginning of term, travelling to Arundel Castle to play in the finals day of the National T20 competition. They competed hard, but ultimately succumbed to Sedbergh to finish runners up.

In hockey, the First XI have begun the new school season in scintillating fashion, beating Kingston Grammar and Cranleigh 3-0 and 7-0 respectively. As usual, they warmed up for these national league fixtures by playing ‘friendlies’ against Oxford and Nottingham universities, impressively drawing against both of these much older teams.

Finally, year 11 student, Daniel Lindsay, should be congratulated for being selected to represent Great Britain at fencing in the U17 Sabre team. This is a great achievement and the start of what we hope will be a successful international career. 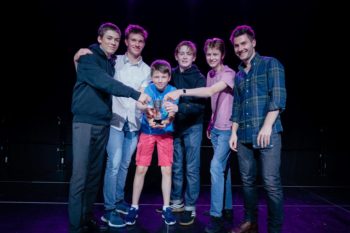 From sports to drama, this year’s theatrical run got off to a typically roaring start with the House Drama competition. The event took place in the Performing Arts Centre on the evening of Friday 11th October and was, es ever, a great deal of fun. Guest judge this year was OW Matthew Dan (2004-11), who since leaving the school has worked as an assistant director at Shakespeare’s Globe, the Royal Shakespeare Company and Chichester Festival Theatre. When Matthew was in the sixth form, he actually lead Smith’s House to successive titles in the drama competition, something yours truly pointed out to him at the beginning of the evening, but any concerns of mine about favouritism were quashed when he announced Tate’s as winners at the end of the night.

Matthew commented how impressed he had been with all eight Houses, and particularly the fact that five of them had written their own plays, but in the end the Tate’s offering, written by, directed by and starring the young Rocketman himself, Kit Connor, just edged it! 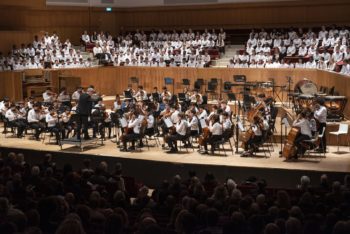 The other major performance this half term was the inaugural Whitgift Foundation Concert, which took place at the recently opened Fairfield Halls on Wednesday 18th October. The concert featured more than 300 students aged between 10 and 18 from Whitgift, Trinity and Old Palace. They performed a programme of choral and orchestral music with a range of exciting repertoire including Grieg’s Piano Concerto, 1st Movement, the exquisite Rutter Gloria, as well as two world première performances. Unfortunately, I could not be there, but from all accounts it was an excellent evening and certainly something to be repeated in the future.

To conclude, you may be interested to hear that the school has entered into an educational partnership with the Mobius Foundation, a not for profit organisation working towards environmental sustainability. The partnership will launch the World Environment School, Coorg (WESc) – the first school of its kind in India and South Asia to take a leading role in promoting and delivering environmental education with sustainability. It will be based in Karnataka, South West India and open to students from India and around the world from 2021.

Whitgift’s partnership with WESc will focus on providing academic support to the School, including establishing all aspects of the curriculum and syllabus development, assessment and best-teaching and learning practices. Part of the WESc syllabus will include the International Baccalaureate, where Whitgift holds the position as the top boys’ school in the UK.

Chris Ramsey, Headmaster said, “We hope that Whitgift’s involvement, alongside a number of international partners will make a genuine difference to education in a growing economy and allow us to participate in a sustainable educational model. Over time, as well as us sharing our knowledge, I’m excited at the prospect of how our students and the entire school community will benefit from collaborating with such a forward-looking ‘green’ school.”