News From The School – November / December 2020

Following an unprecedented extended closure of the school due to the Corona virus pandemic, Whitgift opened its doors again to all pupils and staff at the beginning of Michaelmas term in September.

The mood was joyous as teachers and students got back to doing what they know best, all bathed in the glorious late summer sun. Government guidelines were happily adhered to because everyone knew that whilst it meant having to get used to yet another ‘new normal’, it was significantly better than remote learning. Proper classroom teaching, proper social interaction, just a little spread out!

Boys got used to staying in their zones; indeed, they rather appreciated the comfort of having all their lessons in the same place. For once it was their teachers dashing around the school to get to lessons on time rather than them!

For some reason, I could not get the Crystal Maze theme tune out of my head as I crossed from zone to zone, striding with purpose past six foot signs stating ‘You are now entering the Fifth Form Zone’, ‘You are now leaving the Second Form Zone’ etc.

Whilst the full co-curricular programme could not restart due to the regulations we had to adhere to, we have still been able to offer an extensive variety of sports, just without the competitive fixtures against other schools. Right from the start, Games lessons were able to go ahead and Saturdays saw the school full of rugby, hockey and football players participating in training sessions.

For the first four weeks, all the A and B team cricketers were also able to play inter-school games, having missed out on the entirety of the summer term due to lockdown. To pull this off, keeping all the boys in their separate, year group bubbles, was quite some logistical feat for the sports department and took a heroic effort from the heads of the respective sports, who often were in school from 8 o’clock Saturday morning to 5 o’clock in the afternoon. But it has been worth it to see the joy it has brought to the hundreds of boys participating.

One unexpected treat was that last year’s U12 footballers got the opportunity to complete their national football competitions. Just before lockdown, both the U12 A and B teams had made it through to the final and semi-finals respectively of their ESFA tournaments. The U12 Bs played their semi-final against Parmiters School at the start of October and edged the tie 8-7 in a penalty shoot-out thriller. Unfortunately, with Corona cases rising and restrictions tightening, it was decided that the final could not go ahead and so the boys had to share the cup with the side they would have played in the final, Canon Slade School.

The A team were more fortunate in that they were able to play their final, but not quite so fortunate in how things panned out. Up against St Bede’s School, the boys played some sublime football to race to a 3-1 lead, only to capitulate in the final ten minutes to 3-3 draw and then go on to lose 5-6 in a sudden death penalty shoot-out.

Sport can be cruel, but when set aside everything else going on in the world at the moment, I’m sure the boys will see it as a blessing that they could play at all.

Music and Drama have not been so lucky due to the unavoidable fact they take place indoors, where the virus is more transmissible. Individual music lessons were able to take place after a couple of weeks, but cross bubble ensembles such as orchestras and bands are having to wait.

For obvious reasons, plays have not been allowed, but there is hope that House Drama may be able to go ahead with boys recording themselves saying lines on Teams and their performances being edited together by a Sixth Form director. We shall see!

This year’s Upper Sixth IB cohort have not let the virus daunt them, being arguably more productive than previous ones. The CAS Project (Creativity, Activity and Service) is a significant highlight in the IB Diploma Programme. Students work independently or in groups to organise a community event, fundraiser or challenge, often with local or international mindedness at its heart.

With overseas travel and social ‘zone mixing’ largely off-limits at present, students in the Upper Sixth were inspired to arrange a week-long five-a-side football tournament for the whole IB cohort, culminating in a final on Friday 2 October. All players showed their commitment to the cause by playing through very wet weather conditions.

This football tournament CAS Project follows on from IB student Hector Revill’s 31 half marathons in 31 days, which has raised over £2,500 so far for Antibiotic Research UK, and Daniel Munks’ success in the Keble College Theology and Religion Essay Competition 2020. 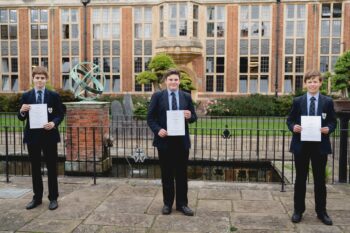 The contest, a collaboration between UKNEST and the Royal Navy, promotes the importance of engineering, encouraging innovative technical thinking by pupils. Students were tasked with designing a specialised vessel for delivering humanitarian aid in the aftermath of a natural disaster – very much in keeping with the Royal Navy’s role in responding to such instances. All entries were reviewed by an expert panel of judges who considered their initial concept, proposed design and artwork. Whitgift won with their futuristic vessel, HMS Nightingale!

For a second year in a row, Whitgift staff and students arrived on-site on a grey day in October in splashes of yellow to support the #HelloYellow campaign, aimed at raising awareness and money for the UK’s leading charity fighting for children and young peoples’ mental health, Young Minds.

This year’s campaign focussed on kindness, both to one another and to oneself. The entire Whitgift community engaged in ‘Disconnect to Reconnect’. The aim was to spend the whole day ‘mobile phone free’, while making the most of the opportunities to look up and out by removing some of the usual daily stresses of online life.

The morning began with the thought-provoking viewing of a kindness video featuring members of the whole school community. Other in-school activities included a fun-filled photo booth set up in the Junior School Foyer, which had both pupils and staff queuing all through break and lunch (appropriately spaced!) with their own props in hand, ready to have their photo taken.

To support the ongoing wellbeing of all staff and pupils, Whitgift now has around 30 Mental Health First Aiders who can be identified by their yellow lanyards and are happy to be approached at any time for an informal or formal chat. A JustGiving page was set up for donations and at the time of publishing over £2,000 has been raised, doubling the figure achieved in 2019. If you would like to contribute please visit: https://www.justgiving.com/fundraising/whitgiftschool 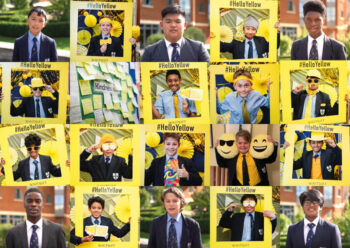 Two long-standing members of the support staff bade farewell to the school over the last couple of months. Head Porter, Ian Field, had been part of the fabric of Whitgift for over 40 years and finally retired from serving the school at the end of August. For as long as I can remember, he has been living in the Gatehouse at the front of the school, striding around the corridors to attend to issues, driving boys around in minibuses and manning the front desk as the public face of Whitgift. It is going to take quite some time to get used to him not being around!

Marion Petschi has attended to boys’ and staff’s medical needs as head nurse for 22 years and she stepped down from the role at the end of the first half of term in October. A lot has changed in the world of school medicine over the past 22 years: when Marion started, peanuts were a common snack eaten by boys in the playground; by the time she finished, she was administering training to hundreds of staff on how to administer life-saving injections to boys suffering from anaphylactic shock! Marion has coped with all these changes with grace and humour and, like Ian, will be sorely missed!

Last but by no means least is the extremely uplifting news that Whitgift has just been awarded the title of Independent Boys School of the year 2020. The school qualified as a finalist in early September 2020, after being shortlisted in July. When announcing the award, Jim Massey added it was “a compelling entry that radiated the school’s inclusive and collaborative values in the context of an all boys’ school.”

Headmaster Chris Ramsey said, “We are delighted to have been awarded the title of Independent Boys’ School of the Year 2020. We were amongst some exceptionally worthy finalists and are humbled that the judging panel selected us. This is a wonderful acknowledgement of the inspiring work of everyone, from the students and staff who make our school what it is, to our hugely supportive parents and alumni.”

The awards scheme is run by the Independent School Parent portfolio of magazines and celebrates the success stories of schools and their students across the independent education sector in the UK. The judging panel was chaired by Dr Helen Wright, international education adviser and past Vice Chair of the ISC, supported by a panel of judges which included leading Head Teachers and representatives of several professional associations.