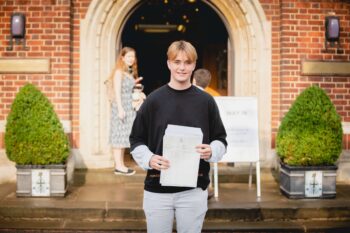 News From the School

For the last few years, the summer holiday period has been a very rewarding time for Whitgift. Within days of the boys and teaching staff leaving to enjoy their well-earned break, the classrooms, corridors and fields have been bustling again with the sounds of students learning and playing – students from all over the world enjoying the Whitgift Summer School experience. This creates a great deal of revenue for the school and obviously could not happen this year due to Covid-19.

However, due to the inception of the community summer school, Whitgift has once again been full of the sounds of students learning and playing. On 27th July, the school, in conjunction with Croydon Council, opened its doors to local girls and boys in Year 5 who had experienced reduced education provision since school closures began in March 2020. Staffed entirely by Whitgift teachers, the school was able to provide a programme including stimulating lessons in the core subjects of English, Maths and Science, as well as a range of exciting enrichment activities such as Philosophy, Languages, Sport and Music to 45 pupils a week in a Covid-19 secure environment.

Funding for the programme came from both Whitgift and donations from those connected with the School community, allowing 180 pupils from 7 Croydon primary schools to attend for free. So, whilst not in a lucrative sense, I am very happy to say that the school has once again enjoyed a most rewarding summer, looking to give back to the local community and be part of the national effort to fight what the virus has taken away from us.

Results days are a rollercoaster of emotions for boys at the best of times, but this year, as has been extensively documented in the media, took things to another level. With there not actually being any exams to sit due to the closure of schools, students’ results were to be determined by a combination of Centre Assessed Grades (CAGs) and a now infamous algorithm.

Things started off relatively calmly with the IB results in early July. These qualifications are not under the jurisdiction of Ofqual or the UK government and, as things turned out, the IB board proved themselves much more competent in applying the new system than their British equivalent. Indeed, this year’s cohort achieved higher than last year’s excellent group, with slightly more gaining over 40 points, and an average of 39 – once again the best of any UK boys’ school.

With A-Levels, things were not quite so simple. The final picture, following the government’s dramatic u-turn to allow the CAGs without the impact of the ‘algorithm’, was very pleasing: 75% at A or A* and 98% at A*B. However, these were not the results the boys received on results day. If the media is to be believed, the government perpetrated a grossly unfair system which prioritised private over state schools and so you might have expected that our results would have been as above – the outstanding levels we have become accustomed to. This, however, was not the case: the dreaded algorithm had a severe impact on a whole raft of Whitgift boys’ grades, leading to many miserable faces on results day due to first choice university places being lost – something I have not seen before at Whitgift.

Obviously, this all changed within a matter of days, but as I write this, there is still a great deal of uncertainty as the Sixth Form team are having to deal with the resultant chaos of universities now being oversubscribed. I am sure everything will work out in the end, but it is yet another unfortunate hurdle that the class of 2020 have had to deal with.

Things settled down by the time of the GCSE results, with the boys knowing what to expect. Indeed, the CAGs were largely in line with the 2019 results with 65% 8-9, 88% 7-9 and 34 boys gaining the top grade in nine subjects or more.

The new school year starting in September is going to be one fraught with uncertainty due to the swathe of changes necessitated because of the impact of the virus. Concepts such as Year group bubbles, staggered start times and part virtual lessons are all being bandied about, and no-one knows for certain how long we will be able to stay in the buildings with the threat of another spike-induced lockdown looming over us.

One significant change that has nothing to do with Covid-19 is the fact that for the first time in years, Peter Ellis will not be part of Whitgift life. Pete joined the school as a bright-eyed First Former back in 1991 and proceeded to spend a cumulative total of 26 years here, having returned in 2001 as a Maths teacher. During the ensuing nineteen years, Pete took on a multitude of roles including Head of First Form, A team hockey and cricket coach, Head of Maths and, for the past six years, Second Master. Normally, one would expect to move onto a Headmastership from such a high position in a prestigious school, but Pete has gallantly decided to put his career on hold to support his wife, who is set to become the country’s Deputy Ambassador to Uganda, meaning an African move for the whole family. Pete has given an incredible amount to the school and will be sorely missed.