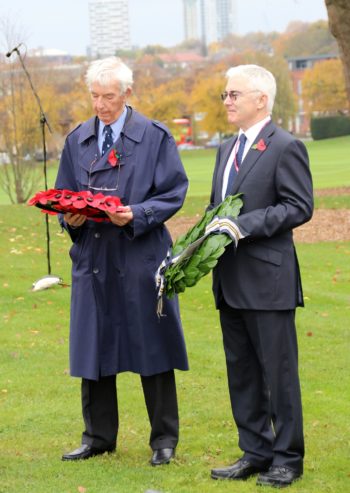 A large contingent of OWs, some in uniform, gathered in Big School for a fortifying cup of coffee before moving onto the Terrace for the usual School Remembrance Service. To mark the significance of this year’s event, the Service followed two special early morning Assemblies held for the boys to mark the Centenary of the ending of WW1, during which they were addressed by Col Mike Cornwell OW (1984-92).

Wreaths were laid at the foot of the Grade II listed War Memorial by the Head Boy, Chairman of the Staff Common Room and WA President Lord David Freud (OW). In addition, David Straw (OW) laid a wreath on behalf of the OW Trustees Ltd to mark its role in the overseeing of the OW War Memorial Fund, initially set up by the OWA to care for the children of the fallen WWI Old Whitgiftians.

Having enjoyed the music from the Corps of Drums, the OWs reconvened in Big School to witness a rare event in the history of the School. Due to the exceptionally good offices of PP Nigel Platts OW (1955-64), the WA obtained the set of War Medals belonging to Lt R.G. Hill OW (1902-04), which having been expertly mounted, Nigel proudly presented to the Headmaster, Chris Ramsey.

Later, after more OW fellowship, a small group of senior OWs adjourned to a local restaurant for a celebratory lunch which commenced with a solemn and heartfelt toast to the 251 Old Boys who did not return home to Haling Park.

*WE WILL REMEMBER THEM* 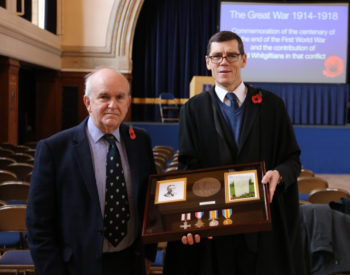