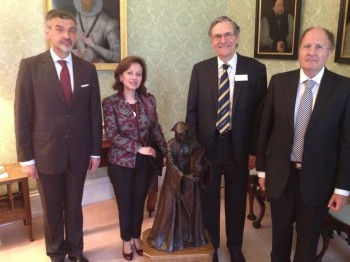 (l to r) The Bulgarian Ambassador and his wife; Dr Christopher Barnett; and Sir Gregory Winter

The historical links between Whitgift and Trinity College go back more than 500 years, since the School’s Founder, John Whitgift, was Master of Trinity College from 1567 to 1577. Over the centuries a very large number of Whitgift boys have gone on to Trinity, including twenty during the time of the present Headmaster, Dr Christopher Barnett.

To honour this connection, a concert by some of the School’s most talented musicians was held in the Master’s Lodge at Trinity on Friday, May 8th, by kind permission of the present Master, Sir Gregory Winter.

At the pre-concert Reception, Sir Gregory was presented with a copy of the statue of John Whitgift which had been commissioned by the Headmaster, Dr Christopher Barnett, for the new Founder’s boarding house at the School.

Since a number of the School’s outstanding musicians come from Bulgaria – as well as countries such as Moldova and Romania – the concert was organised in association with the University’s Bulgarian Society.

The performance by twelve of the school’s most talented musicians was attended by the Bulgarian Ambassador, Mr Konstantin Dimitrov and his wife, Nadia, together with a number of Old Whitgiftians including Professor Michael Proudfoot, Professor Donald Broom, Professor Alan Windle, Dr Paul Flynn, Rumen Cholakov, Seegawa Kiwanuka  and WA Chairman Pip Burley.

At a celebration dinner following the concert, Sir Gregory Winter paid tribute to the excellence of Whitgift’s  young musicians, describing their performances as “remarkable” and “inspiring”.