We Make Events / Light it in Red 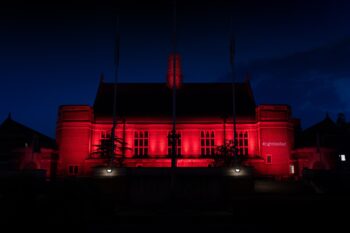 On Tuesday 11th August, Whitgift School’s Big School, along with hundreds of venues around the country, was lit red as a display of solidarity with theatre and event makers in the UK. To understand how we got to venues being lit in red we do have to look at the pandemic and the effect that it’s had on the arts.

When everything closed down and we began our first week of lockdown, nobody expected this to last as long as it has. We all thought it’d be over by June and we can get on with our lives as normal. True to their word at least the Government in July started to ease the lockdown restrictions: pubs, bars restaurants and many smaller non-essential businesses began trading again, much to the joy of everyone. However, the sector that was clearly not going to work was theatre and events, you can’t have a party or 1,000 people sat side by side in a theatre for obvious reasons, and yet we had little support as an industry.

Some theatres with the resources, were lucky to turn into cinemas and began showing films to increase revenue, but for many others this was not and is still not a viable option. As we got closer and closer to August the arts and music industry grew more and more concerned that major festivals, theatre shows, fringe festivals and everything in between, would not happen. The major source of income for hire companies, music producers, film makers, theatre makers and so many more, was impossible to access. Which leaves us where we are today.

Even prior to Covid, regional theatres across the country were facing financial collapse and prolific theatres like the Grand in Blackpool were on the verge of closing their doors for good. Whilst we expect that theatres in London will be ok; the West End is lucky with high ticket prices, and part of the 1.57 Bill arts funding package, once theatre is able to resume those venues will bounce back quickly. The ones that suffer permanently will be the local theatres where so many people discover their joy and interest in the arts. Without local theatres, children who can’t afford to come to London and watch a West End show will have no access to theatre at all, and the next generation of creatives and theatre makers will be lost to us.

This issue goes all the way down the supply chain. It’s not just the performers and show staff that are suffering at the moment, it goes down to caterers, hire companies, delivery driver, manufacturers, front of house staff, cleaners, bar staff, technicians, freelancers and so, so many more. One of the key moments in this Government’s attempt to help was to offer a Self Employed Independent Support Scheme (SEISS), acting as a furlough system for freelance and self–employed people from every industry. Unfortunately, because of the way that arts contracts tend to work (often you will be on payroll for 6 months of the year and then freelance the other 6 months) you don’t have a permanent job to get furloughed from but you also don’t qualify for SEISS (I am one of these people also having just graduated) and so there is a swathe of Freelancers left unsupported and desperate for help.

There is so much more to be said about this issue that I haven’t said here, and if you want more information head over to PLASA.org/we-make-events where you can find out about the campaign. Suffice to say that on Tuesday 11th of August, Big school was lit in red in a moment that made me, and arts professional, feel incredibly proud to be a part of a school that is so ready to support its alumni in their industries.

I would like to thank, from the bottom of my heart, the team at Whitgift who are there at every event, every day, working until late at night to ensure dinners, meetings, plays, open days, parents evenings, graduations, CCF AGI, and every event in between, goes smoothly. Without them I wouldn’t be where I am now, and so many children and alumni, wouldn’t have had the same experience of theatre without them.

If after reading this you want to help in any way here are a few suggestions: Write to your MP, sign up on PLASA’s website in support, donate to theatres trust who help at risk theatres, and finally keep the conversation alive and when we return, which we will, please support your local theatres and artists.