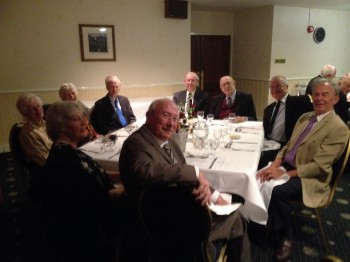 Saturday 17th October saw Old Whitgiftians and their partners from all over the West Country – Cornwall, Devon, Somerset and Dorset – gather for a very sociable evening at the Tiverton Hotel.

The SWOW (South West Old Whitgiftian) Dinner had been missing from the OW calendar for a number of years until it was resurrected in 2013, and that event proved to be such a success that a proposal to repeat the occasion this year was received with enthusiasm by the SWOW community.

The Tiverton Hotel – a small, modest establishment on the outskirts of town – had treated us well two years ago, so that was where we returned.

So soon after 7 pm our south western contingent of OWs began to gather in the bar and immediately faces were recognised and conversation flowed.

We moved on to dine in the attractively laid out Topaz Room where organiser David Stranack said a few words of welcome and encouraged guests to minimise formality and maximise enjoyment. The hotel staff looked after us well and served an enjoyable meal as wine and conversation flowed.

As coffee was served, WA Chairman, Pip Burley gave the gathering an update on Association affairs, commenting particularly on a recent encouraging growth in membership after some years of little movement.

Pip was followed by Alan Cowing, Chairman of the Whitgift Sports Club, who provided a summary of the Club’s recent achievements, commenting particularly on the very large numbers of youngsters in the youth sections of the OWRFC and OWCC who are currently enjoying sport at Croham Road.

As the formal part of the evening drew to a close there was a general migration of members towards the hotel bar, where conversation, reminiscing and beer continued to flow.