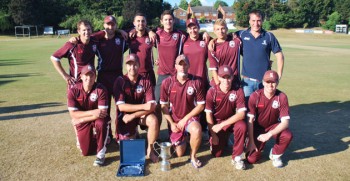 Reigning National T20 Champions Wimbledon have won the Surrey T20 competition for a record 4th time and now progress into the ECB National Competition where they will play the winners of the Kent, Hampshire and Sussex leagues.

In a thrilling day on Sunday 28th July, at the Whitgift Sports Club ground in South Croydon, attended by over 300 spectators, Wimbledon beat Sunbury by 6 wickets. Sunbury were bowled out for 125 in 20 overs and Wimbledon comfortably chased down the target, scoring 128-4 in 18.3 overs, with former Hampshire batsman Chris Benham hitting 50.

President of The Ryman Surrey Championship Andy Packham, presented Neil Turk, captain of Wimbledon, with the trophy, congratulating him and giving him the whole-hearted support of the entire county in the National Rounds on August 11th.

Chairman of The Ryman Surrey Championship, Crispin Lyden-Cowan said: “The two finalists, Wimbledon and Sunbury, were superbly matched and both teams played great cricket.  They were both a credit to our county and we all wish Wimbledon the very best for the National rounds to come.”

He added: “On behalf of the Ryman Championship, I would like to thank the Whitgift Sports Club for an incredibly successful day. Your efforts, organisation, logistics and commitment on the day made it hugely enjoyable for everyone. And you even managed to sort the weather!  My sincerest thanks to all at the Whitgift Sports Club for their contributions and hard work in making today another memorable day for the Championship.”