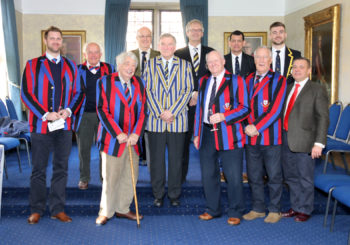 Due to this wretched virus, there has been no inter-school sport this autumn and with no matches to watch there has been no occasion for the lunch especially under the strict governmental regulations. With interest and support waning amongst members, this seems the ideal time to blow the final whistle on this function.

I have very much enjoyed the last 17 events when we have eaten lunch and tea in various venues around the School from a packed Old Library to a select few in the Staff private dining room, via the Founder’s Room and Sixth Form Centre. We have had the opportunity to support the School Rugby, enjoy exciting games of top-class schoolboy rugby and of course watch with pride the blossoming of our current crop of England International and top premiership players (20% of the side in some matches).

For the record, over the years we have watched games against seven different schools, winning 12 and losing 5 with points for 379 and 258 against.

But, as with everything, it is the people who you meet along the way that make these afternoons so memorable. I remember, at the very first lunch we had, Martin Turner in his England rugby blazer, Raman Subba Row in his England cricket blazer and Gerwyn Williams in his Welsh rugby blazer. Since then, we have had many other different blazers on show, naturally Whitgift colour blazers (which still fitted!), OWRFC and OW blazers, other local Old Boys’ club blazers, Light and Dark Blue university ones and I even had the audacity to wear my Father’s school colours blazer!

Roger Utley the ex-England international came as the Harrow coach, although unfortunately his old Headmaster ,Ian Beer (OW and England) was too unwell to join him. In 2006, Mike Wilkinson as that year’s OW President brought along his School 1st XV team members in a 45th reunion of their famous 1961 unbeaten season.

But it was in 2014 that we were joined by the first Englishman to hold the Webb Ellis Rugby World Cup, even if it was in an All Black shirt, when John Gallagher, as a proud parent, was able to witness his son Matt score one of the finest individual tries ever seen on Big Side. From full back inside his own 22 taking a difficult high ball he set off up the slope beating most of the John Fisher side to score between the posts at the pavilion end.

It was only in 2018 that I was at long, long last able to present the School with the framed shields of the National Schools seven-a-side campaign-1966 Runners Up and 1967 Winners, although unfortunately the captain Chris Saville was unable to be with us that afternoon. I know for a fact that Gerwyn Williams regarded that win as the pinnacle of his School coaching career even trumping his magical 1961 “Whoosh” rugby move (for whose initial introduction onto Big Side I modestly claim the credit)!

These and many other happy memories, such as the School Chaplin Rev Colin Boswell writing special rhyming graces for the lunches and Phil Seear wearing the Millfield tie, he was given by their captain when Whitgift spoilt their unbeaten season 50 years previously – which will live on.