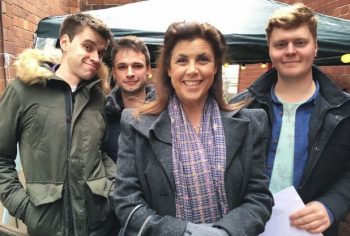 Joe Murray (2004-11) William Downes (2003-11) and Joe Rawlinson (2003-11) appeared on the hit property show accompanied by hosts Phil Spencer and Kirstie Allsopp as they tried to get onto the property ladder.

According to an article that appeared in the Croydon Advertiser on 13th September, the three have known each other since their time at Whitgift and had originally applied to be on the show on a bit of a whim!

Joe said: “We saw it was advertised online and a friend said apply on the off chance you could get on, you never know. It was out of curiosity and almost as a bit of a joke. The show got in touch with us within five minutes or so after we applied, it was all really quick. I think it’s because you don’t usually get three people applying to be on the show.”