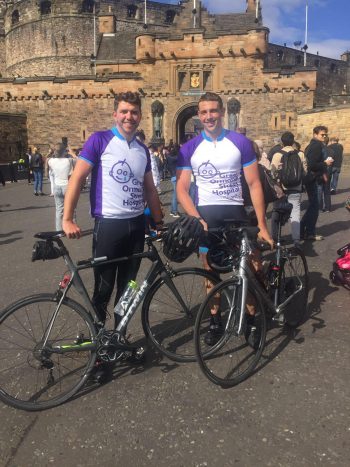 On Thursday 27th July 2017, two London men – Ben Oliveira OW (2002-09) and Carl Plinston OW (2002-09)– set off on a 400 mile cycle from Windsor Castle to Edinburgh Castle, which they aimed to complete in just 48 hours. Surpassing even their own high expectations, they arrived on Saturday 29th July at 10am, with 30 minutes to spare off their time target.

The challenge was not plain sailing: One of Ben’s spokes broke before Kendal, Cumbria, and the pair decided to risk it and carry on, as they weren’t sure they could spare the time to get it fixed. Then, 35 miles outside of Edinburgh, with only 5 hours until their target time, Carl’s gear chain snapped, forcing a hasty roadside repair which left Carl with only three gears available for the final stretch.

However, relatively speaking, the bikes ended up in considerably better nick than both cyclists! Ben and Carl endured the whole 48 hours with only one hour of sleep, in Carlisle, before they cycled across the border on Friday night (attempting initially to set off without their helmets, in their sleep deprived daze).

In total, Ben and Carl cycled 400 miles and climbed an ascent of more than 8,856 metres – 8 metres higher than Mount Everest.

They have now reached their fundraising target of £750 for Great Ormond Street Hospital, but Ben and Carl are hoping to raise as much as possible still. The JustGiving page remains open if you would like to donate. Please visit www.justgiving.com/fundraising/ben-oliveira2