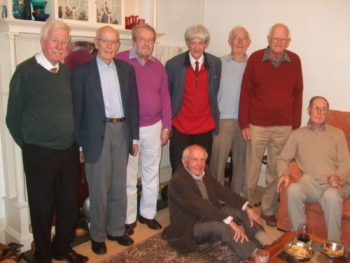 Our 67th anniversary reunion took place on 7 November 2019, chez mois. Our Honorary Member (my wife, Angela) and Ailsa Boyle, John Webb’s partner, came up trumps yet again with a splendid lunch. We – that is those in the attached photograph (from left to right standing: John Hamilton, John Sutcliffe, Ian Brown, Brian Halfacre, John Webb; and seated: Kenneth Rokison and myself) just did all the talking.

But first we drank a toast to absent friends – living (10), “lost” (1) and deceased (9), not least to Noel Parkinson who had sadly died in July and of whom some (myself included) had known for 74 years (we were at Elmhurst School, South Croydon, together, prior to entering Whitgift).

“It is a truth universally acknowledged” (quote) that when a party of over 80s foregather, conversation will inevitably turn to ailments and so it did. Nothing morbid but a recognition of what ‘real’ life is like at our ages and offering helpful hints over dealing with various malaises.

But very quickly something triggered a jump back 50 years in recalling an altogether different ‘real’ life for most present, namely doing National Service from Catterick to Singapore and Suez, with references to British Foreign policy of the period, the Anglo-American special relationship and earliest experiences of flying, both in military and long-forgotten commercial aircraft.

In no time we pressed on back to School-days – a post-War Whitgift in 1947 to 1956, including the gastronomic experiences of whale-meat, horse meat and bully-beef for all; while for some musical/drama delights of performing in annual Gilbert and Sullivan operas begun by John Odom and Ian Smith (with scenery painting led by Bob Jones), and lustily singing  (or in my case, by order, mouthing), in House Music Competitions. And debating in the Head’s (E.A.G. Marlar’s) weekly philosophy and religion lesson. We recalled one on: “Do animals have souls?”.

But not for too long did we dwell in the past. Rather, acknowledging the intellectual, physical, and cultural benefits of a Whitgift life that had supported us over the past seven decades, we turned our wide-ranging discussions forward to the issues of today and tomorrow’s worlds. I would like to claim that we avoided the dreaded Brexit word but my memory may well be failing me, alas! But what I am certain I recall correctly is that we remain loquacious! And ever optimistic over at least someone from the Upper Fifth of 1952-53 benefiting for an eighth decade and literally keeping the name alive a while longer yet.