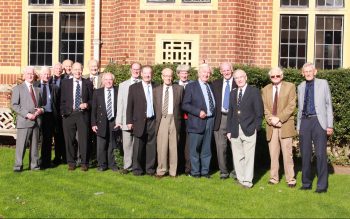 On 25th October past, thanks to help from the School and WA staff and the excellence of the School Caterers, we hugely enjoyed a quite superb Luncheon in the Old Library and publicly register our thanks here.

Our annual reunions began as tea parties in Cambridge in 1959 and have continued, initially as evening now lunch parties, largely thanks to the culinary skills of my wife, Angela, from 2012 our Honorary Member. At all of these, we have prided ourselves that, whilst giving due deference to our School for all the benefits we derived from our teachers, our discussions, whether at age 31 or 81, have primarily centred on the world ahead of us not behind – the futures for us, our School and the UK.

But this year (2017), in celebrating 65 years since we were the Upper Fifth of 1952-53 and, for some, 70 years since we entered the School portals together in the First Form, it was different.  In a seemingly unconscious act of collegiality, we chose, unashamedly, to look back and enjoy all the memories we shared. Robert (‘Bob’) Schad, the sole survivor now of those who had taught us in 1952-53 was our guest and set the standard with masterly reminiscences of his fellow Magistri, not least in their part in the Domini Club (Cricketers). Memories and conversation flowed freely; collegiality grew visibly as did the realisation of the immense amount of change we have seen. Little could epitomise that better than the vast contrast between the meal we had enjoyed and our memories of Mrs Henry’s school lunches of the late 40s and 50s so stalwartly carved (forgive the pun) out of the restricted ingredients of rationed food plus bully beef, horsemeat and whale. But, lest we forget, it was her successful efforts which enabled us to play our sports with vigour and, dare I say, contributed to the longevity we have since enjoyed.

Come January all but two of us will be in our 80s and the 15 of us present (see photo) were 50% of the original class and three-quarters of those known to us as extant. Our absent colleagues, namely: Roger Brasier, Ian Brown, Geoffrey Howard, Peter Kennedy and Alan Stocks were so by reason of distance (Australia) or medical challenge/mobility or both. All sent their news and we reciprocated with a Toast to them and remembered all our class-mates of 1952-53. To mark this unique occasion, Peter Kennedy OW (1947-54) went further and kindly let his bardic talents out from under the bushel and sent us an especially penned poem – Vincit qui Patitur, to which our resident thespian, Kenneth Rokison OW (1947-55), gave full justice in his delivery of it to us. Here it is.

The poet envisages his regrettable absence from the Reunion:

These are my true and my instinctive words

and thus caparison’d as you fondly are

you will your foray to the hornèd moon assay

and in its light make sport as if ’twere day;

and any man who is not of your cloth

or any man whose time is out of joint,

whose physic will not meld with that of yours,

needs must but have to hold himself aloof

and count himself accurs’d he is not there

to take his meat and sust’nance at your board,

and at your tables with fine damask draped

so to carouse with you that he might think

the dalliance gave the answer to his wish.

If only he could make the lonely travail

and journey thence to gather with you others –

if only he could join that band of brothers,

and catching hold of erudite sobriety

become elected to your bright society.

Bright? Yes, and back now to facing forward, if toward an uncertain future on many fronts. But we are optimistic enough to promise more reports yet and daring enough even to expect some to be celebrating a 70th anniversary. Who knows?

Sadly, since this article was written, David Brewster, a member of the reunion group passed away peacefully at home, aged 81.